Will the Fukushima disaster spark growth in sustainable energy investments?

Thursday, 26 May 2011
0
While nations struggle to recover from the global economic slowdown, solar and wind energy investments are surging forward. Many investors are convinced that solar, wind, and other sustainable energy technologies will become the only viable energy options of the future as environmental and economic factors price fossil and nuclear fuels out of the market. But other investors are not so sure.

Despite some investor uncertainty concerning solar and wind power installation costs at a time when coal is still plentiful and new nuclear power plants are popping up around the world, the global market for solar photovoltaic (PV) and wind energy systems is accelerating, growing from a combined $6.5 billion in 2000 to $131.6 billion in 2010, according to Clean Edge’s Clean Energy Trends 2011 report. By the year 2020, the worldwide solar and wind market is projected to be about $236.5 billion. Clean Edge notes that the growth rates for clean energy technologies “ . . . now rival that of earlier technology revolutions like telephony, computers, and the Internet.” 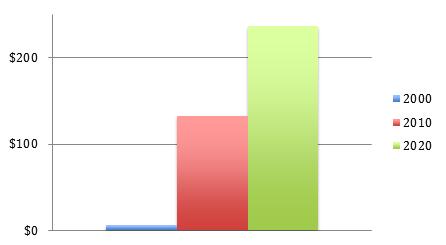 In the U.S., a robust 25 percent of all venture capital activity in 2010 was for clean energy technologies. About 883 MW of grid-connected PV panels were added, a doubling over 2009, as reported by the Federal Energy Regulatory Commission (FERC) in its State of the Markets 2010 report. At the same time, utilities tripled their PV installations to 242 MW. PV growth in the U.S. was encouraged by state incentives, favorable federal tax credits and grants, and a reduction in system costs.

Wind energy led all U.S. sustainable energy categories in 2010, adding about 5,000 MW. Nevertheless, this added capacity was just half of what it was in each of 2008 and 2009. Although turbine pricing has been dropping, the FERC reports that lower natural gas prices and a weak economy acted together to discourage long-term power purchase agreements.

Despite a disappointing 2010 for the wind energy market, the prospects for a rebound in U.S. wind installations in 2011 looks promising. Already 1,100 MW of wind power has been installed in just the first quarter, according to the American Wind Energy Association, and another 5,600 MW is under construction. Although too early to know with certainty, this appears to be a global trend.

Will the ongoing Fukushima nuclear power plant disaster shift public opinion away from nuclear energy in favor of sustainable energy technologies? Following the Great East Japan Earthquake and subsequent mammoth tsunami, concern about nuclear power generation has spread throughout the world, and many governments have suspended new plant construction. But facing the time lag and costs required to bring large-scale sustainable energy technology online, some governments are reluctant to abandon nuclear power too quickly.

A number of nations, including Germany, India, Italy, Switzerland, Taiwan, and Venezuela, have recently shut down older nuclear power plants for inspection, suspended plans to extend the life of older plants, and curtailed new nuclear plant construction. And other governments, including the U.S., are re-examining nuclear power safety.

On the other hand, Russia is moving forward with plans for six new nuclear power plants, believing that nuclear power is safe if built in the right location, appropriately designed, and operated correctly. Turkey is continuing plans to develop a third reactor, and Iran’s Bushehr nuclear power plant is reportedly about to become fully operational.

Sparked by the nuclear power plant crisis, the Japanese have just announced their intention to reformulate Japan’s energy policy with a heavy emphasis on sustainable energy technology. The new policy aims to slash solar power generation costs, to install solar panels on most rooftops, and to build large offshore wind farms; the goal is for Japan to become the international leader in sustainable power production.

Even before the Fukushima incident, many nations had been integrating solar and wind power into their long-range energy planning. For example, China, now the world’s largest energy consumer, has committed to generating 15 percent of its energy from renewable sources by 2020. Furthermore, an increasing number of energy companies are looking for opportunities to collaborate with their sustainable energy counterparts, as illustrated by the partnership recently announced between France’s oil giant Total and California-based SunPower Corporation.

A post-Fukushima poll found that about 60 percent of Americans oppose building new nuclear power plants, up from 48 percent in 2009. As similar opposition to nuclear power grows throughout the world, sustainable energy technology has been gaining favor with the public, and this sentiment is likely to continue even after the Fukushima situation is brought under control.

An interesting footnote to the Fukushima story is that Japan’s wind farms proved their mettle under the most extreme conditions, with not a single wind turbine damaged by either the great earthquake or the tsunami that followed. However, there were some power disruptions due to power line damage. The offshore Kamisu wind farm, located about 300 km from the earthquake epicenter, survived 5 m tsunami waves.

The expanding PV market is due, in part, to dropping system prices – down 30 percent in 2009 and another 10 percent in 2010. And an oversupply of PV modules made in China may further drive down prices later in 2011. Also, the potential for growth in the solar-thermal energy market should not be overlooked. A case in point is the U.S. Department of Energy’s (DOE’s) recent $1.6 billion loan guarantee for a 392 MW solar-thermal generating facility in Ivanpah, California. (Solar-thermal technology uses lenses and reflectors to capture and concentrate the sun’s energy.)

Wind turbine systems may also see cost-breakthroughs as well as improved performance in the coming years, although public policy favoring wind energy will continue to be critical. A study co-sponsored by the U.S. DOE concludes that wind power could provide as much as 20 percent of U.S. electricity demand by 2030, provided that a national commitment is made to clean, domestic energy sources. For continued growth of solar and wind energy in the U.S. and elsewhere, some issues must be overcome, including the following:

• The dependence of PV systems on rare earth metals, largely from a single supplier. (While not currently in short supply, 95 percent of rare earth metals are from China, and there are no assurances that prices and supplies will remain stable in the future.)

• In the U.S., the absence of a cohesive energy policy that includes tax and regulatory incentives and reduces regulatory uncertainty.

There is no reason to doubt that the hot market for utility-scale solar deployment will continue in the China, Europe, India, the United Arab Emirates, and the U.S., and emerging markets in Australia, the Middle East, and South Africa look promising. India, in particular, may prove to be an excellent market for PV systems, where approximately 400 million Indians – a third of the population – do not have any electric power whatsoever, according to the World Bank.

Climate change on the horizon

The Intergovernmental Panel on Climate Change reports that the world could obtain close to 80 percent of its energy from renewable sources by 2050 if backed by the right enabling policies. But what are the chances of this happening anytime soon, in light of mounting public apathy, if not antipathy, over climate change science? Following a meeting earlier this year of the Mitigation Action Implementation Network, Neeraj Prasad, Manager of the World Bank Institute’s Climate Change Practice, reflected on the urgency of addressing global warming:" These are early days, and it is important that we continue to make [climate change] progress in small increments while we wait for the negotiations to deliver an outcome that works for our clients, particularly in developing countries. But climate change needs a global response, across sectors and countries, and many experts feel that there is little time left before our current level of GHG [greenhouse gas] emissions reaches the tipping point of irreversible impact. This why we need to learn to manage uncertainty."

His view is that in light of the uncertainty surrounding climate change science and public policy, it is important that progress continue toward mitigating climate-altering practices. The World Bank is doing its part by working with more than 130 countries on low carbon and climate resilient economic growth. As evidence mounts on our warming planet, alarm over the consequences of climate change may be the ultimate driver in the development of solar, wind, and other sustainable energy sources.

Editor's note: This article was kindly contributed by Richard Crume who works as an environmental engineer and teaches a university course on air pollution and climate change. He lives in Chapel Hill, North Carolina (U.S.).