Wednesday, 27 June 2012
0
REM
The winners of the Sustainable Energy Europe Awards (SEE) and the Managenergy Local Energy Action Award were announced on 19 June in Brussels (Belgium) during the annual EU Sustainable Energy Week. They included a project to help low-income households perform energy-savings checks in their homes, and a web-based, 3D game engages and educates players about energy issues and their implications. 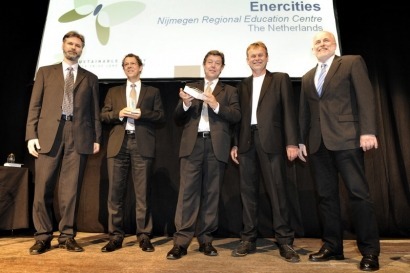 Hosted by Günther H. Oettinger, EU Commissioner for Energy, this is the first year that the two awards have been combined. The six outstanding projects, chosen from 262 entries from across Europe, offer ambitious and innovative examples in the area of energy efficiency and renewable energy sources.

The sixth edition of the Sustainable Energy Europe Awards attracted 262 entries to win in one of five categories covering Communicating, Consuming, Learning, Living and Travelling. The 2012 winners are:

A consortium coordinated by the Association for the Promotion of Renewable Energies (APERe) is helping to build consumer understanding of, and confidence in, energy consumption and renewables with a ground-breaking idea. Using the weather forecast, an effective communication channel for reaching a wide and diverse audience, it links energy topics to everyday weather conditions. Some 14 media outlets in five countries have changed the format of their daily weather report, incorporating daily pictogrammes for three RE indicators – solar thermal, photovoltaic production and wind energy. These indicators highlight in an accessible way the crucial link between weather, energy sources and consumption.

The Federal Association of Energy and Climate Saving Agencies (eaD) and the welfare association Caritas created a unique project combining ecological, economic and social aspects. Energy-savings advisers visit low-income households and audit energy and water consumption levels and habits. The information is collated in a central database and a report generated advising on low- or no-cost measures to save energy and money – on average up to €100 per year. The project has conducted 75 000 consultations to date, and trained 2 500 long-term unemployed as ‘Stromsparhelfern’ (energy advisers).

Designed by a pan-EU consortium and led by ROC Nijmegen, Enercities offers a game-based learning platform that acquaints young people with the EU 2020 objectives. The web-based, 3D game engages and educates players about energy issues and their implications by setting them the challenge of building a virtual sustainable city. Balancing energy demands with economic, environmental and consumer concerns, players must take into account important ‘real-life’ factors such as pollution, energy shortages, energy reduction plans and renewable energy projects. Promoted in schools, via regional events, competitions and on social media, nearly 100,000 individuals in 155 countries worldwide have stepped up to this virtual challenge.

In 2004, the Brussels-Capital Region (RBC) began several large-scale experiments to gauge the potential for wide-scale participation in reducing the environmental impact of the energy performance of buildings. Based on the positive results, in 2007, RBC (coordinated by IBG-BIM and Bruxelles-Environnement) launched the ‘Exemplary Buildings’ call for projects, a major stimulation programme for the construction and renovation of very high energy and environmental performance buildings. The programme has reversed the city’s energy culture through a mix of policy and actions, achieving significant results without a significant increase in costs. Thanks to the experiment, RBC has imposed standards on all future public buildings (passive) and renovations (very low energy) under its authority.

The 2011 Liftshare Week ‘Remember When?’ campaign used an attention-grabbing, humorous approach to encourage and enable as many individuals as possible to share their journeys, by focusing on what petrol used to cost 20 years ago – and how it still can if you car-share. A multimedia marketing campaign incorporating 245 actions had a direct impact on behaviour, with a record 6 206 members – three per minute – joining the car-sharing network over the course of the five-day campaign. Easily replicated, the project does not just benefit the environment but also makes more efficient use of existing infrastructure, reduces energy reliance, improves accessibility and addresses social exclusion, thereby significantly contributing to four of the five EU 2020 objectives: Employment, R&D/Innovation, Climate Change/Energy and Poverty/Social exclusion.

Managenergy is an initiative of the EU's Intelligent Energy - Europe (IEE) programme. The sixth edition of the Managenergy Local Energy Action Award attracted a record 64 submissions from local and regional sustainable energy initiatives in 23 countries, and the 2012 winner is SamsØ 2.0.

In a country with a long tradition of sustainable solutions supported by green policies, SamsØ was elected in 1997 to be Denmark’s renewable energy island – a demonstration centre for proven technology in renewable energy solutions (see video here). The three main aims of the SamsØ Energy Academy, established in 2007, demonstrate a fully-integrated approach: to achieve an entirely fossil-free community, to increase the number of partnership satellite islands/cities and to train and educate national and international participants, whether stakeholders, schools or the general public. An excellent best-practice example, the project is currently being replicated in other countries, from Ireland and Germany to South Korea and Japan.