Monday, 05 April 2021
0
REM
Alliant Energy plans to add another 414 megawatts (MW) of solar in Wisconsin. This rounds out the company’s previously announced plan to accelerate its transition to clean energy by adding more than 1,000 MW of solar while helping customers avoid more than $2 billion in long-term costs. Upon completion of their more than 1,000 MW of solar, Alliant Energy will own and operate the most solar energy in the state of Wisconsin. 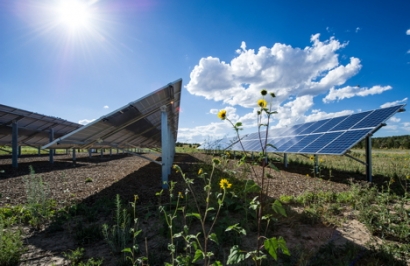 “Guided by our purpose-driven strategy to serve customers and build strong communities, we are accelerating our transition to cleaner energy,” stated David de Leon, President of Alliant Energy's Wisconsin energy company. “This continued transition is a smart investment, benefitting our customers long-term, while also creating hundreds of jobs across the state and providing local communities with shared-revenues.”

The six new projects will be developed in mostly rural parts of Dodge, Grant, Green, Rock and Waushara counties. Once the projects are operational, local communities will receive an estimated $50 million in shared revenues – for the next 30 years – to use in a variety of ways, such as funding local fire departments, investing in school programs and upgrading park facilities. Additionally, local landowners will receive a combined $60 million in lease payments over 30 years.

The additional projects, five of which are being self-developed by Alliant Energy, are expected to create more than 800 local construction jobs across the five counties. They include:

The announcement came as Alliant Energy awaits approval on the Certificate of Authority application they filed with the Public Service Commission of Wisconsin (PSCW) in May 2020. In that application, the company announced plans to acquire and advance six solar projects that would add 675 MW of solar energy by the end of 2023. In total, the 12 planned solar projects will power hundreds of thousands of homes across the state.

Along with the large, utility-scale solar projects, Alliant Energy has made several community-based solar announcements in recent months, including projects in Sheboygan, Fond duLac and Dane County.

Collectively, the company’s transition to solar is outlined in its Clean Energy Blueprint – Alliant Energy’s strategic roadmap to cost-effectively accelerate their use of renewables. It also serves as the company’s guide as they continue to diversify their energy mix to ensure reliability and resiliency – no matter the weather.

Once these 12 projects are fully built out, Alliant Energy estimates that, by 2025, nearly half of their resource mix will be made up of renewable resources (wind, hydro and solar). Combined with upcoming retirements of the Edgewater Generating Station and Columbia Energy Center, Alliant Energy is well-positioned to achieve its goal of reducing carbon dioxide emissions from fossil-fueled generation by 50 percent by 2030 from 2005 levels.

“It’s great for our environment and aligns with our company’s values, which include Make Things Better and Do the Right Thing,” added de Leon.