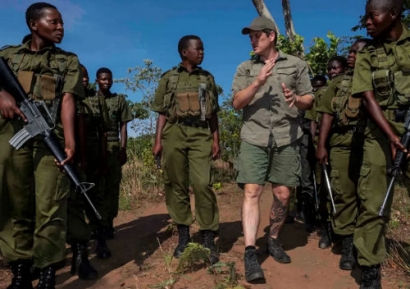 The renewable energy system, comprised of 10-kilowatts of solar panels and 45 kilowatt-hours of energy storage, provides reliable, uninterruptable power to the IAPF’s training facilities in Zimbabwe’s Lower Zambezi Valley with five indoor classrooms, a lecture theater, an industrial kitchen, dining area, laundry room and water well, all of which support the Akashinga rangers.

The all-women ranger force, as chronicled in the documentary, Akashinga: The Brave Ones, directed by Maria Wilehm and produced by three-time Academy Award winner, James Cameron, patrol 1.3 million acres of wilderness and have achieved significant results, including a 90 percent reduction in elephant poaching since 2016 when the program was initiated. Akashinga is a community-driven conservation model, empowering disadvantaged women—trained by experts in conservation and law enforcement, to restore and preserve a network of wilderness areas as an alternative to trophy hunting and bush-meat markets.

“Having solar and storage technology support our facilities and programs gives us the capacity to operate independently and more effectively on the front lines of the fight to protect wildlife and preserve natural habitats,” said Damien Mander, former Iraq War veteran and Australian Special Forces commando who founded the International Anti-Poaching Foundation and Akashinga Program.

“These women are truly courageous, many coming from abusive homes and marginalized communities to join the Akashinga Program and confront armed and dangerous poachers at the intersection of extreme poverty, gender inequity and climate change. They are revolutionizing the way animals and habitat are protected and how local communities can coexist sustainably and equitably within diverse ecosystems that are essential to the future of the planet,” said Catherine Von Burg, CEO and President of SimpliPhi Power.

“Wildlife poaching and human/wildlife conflict are expected to increase with population growth and climate change, and displacing diesel by providing reliable, renewable electricity to those effectively tackling these issues is a win for wildlife, humanity and the planet,” said Moira Hanes, executive director of Empowered by Light.

Photo: SimpliPhi Power partnered with Empowered by Light to deliver a resilient renewable energy system to world-renowned Akashinga Rangers on the front lines of animal poaching and climate changeS