Friday, 07 January 2022
0
REM
EDFI ElectriFI, REPP, and 1PWR have reached financial close on Africa’s second largest project-financed mini-grid transaction. The equity-and-debt investment into the project vehicle, Sotho Minigrid Portfolio SPV, will fund the construction of a portfolio of 11 mini-grids in Lesotho with a total capacity of 1.8MW. Once built, the mini-grids will provide first-time electricity access to 20,000 people and enable seven health clinics to benefit from renewable energy. 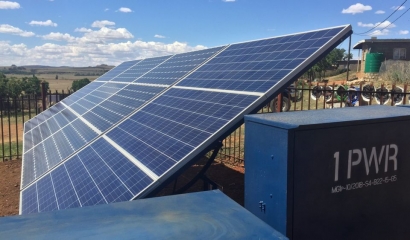 In addition to bringing grid-quality service to the 11 communities by deploying solar-battery energy systems, 1PWR will deploy a raft of technological innovations, including PV trackers – the only such systems currently being designed and manufactured in sub-Saharan Africa. The company will also deploy smart meters optimized for local and off-grid conditions, and pre-built powerhouses to ensure efficient construction and deployment of generation systems.

With the support of European programme GET.invest, 1PWR has optimized its financial modelling and mini-grid development process, enabling it to offer a tariff of 5 Maluti per kWh ($0.33/kWh), which is very competitive for an almost cost-reflective tariff.

Both EDFI ElectriFI and REPP, which is managed by Camco Clean Energy, have previously invested into 1PWR projects. EDFI ElectriFI started investing in the company in 2018, when the EU-funded blending facility signed a development finance loan of EUR 0.1m with 1PWR, allowing the organization to procure a comprehensive feasibility study which laid the groundwork for the current investment in 1PWR’s mini-grid portfolio. In 2019, REPP extended a LSL 7m loan to 1PWR to finance Lesotho’s first solar-battery mini-grid at the village of Ha Makebe. This project became operational in 2021 and now services 215 households and businesses in the community.

“Two years ago, a REPP loan helped 1PWR to forge ahead with its plans to build Lesotho’s very first solar mini-grid and deliver a transformational impact on the underserved community of Ha Makebe,” said Geoff Sinclair, Managing Director of Camco Clean Energy. “It has been tremendously satisfying to witness the successful completion of that mini-grid and there is a real buzz of excitement to now be supporting this next and much larger phase of the project.”

Today, EDFI ElectriFI and REPP are reinforcing their financial support to 1PWR. Once completed, the project aims to create approximately 7,300 new connections and generate up to 3,480 MWh per year, avoiding the emission of some 2,780 tons of CO2 annually. Up to 100 local jobs will be created by 1PWR during the construction of the project. Six permanent positions will be created during operations.

In addition to the investment by EDFI ElectriFI and REPP, 1PWR has received support from a variety of organizations for this project: Grant support was provided by the UN Capital Development Fund and UN Development Program, the US Agency for International Development – Power Africa, the Energy and Environment Partnership Trust Fund (EEP Africa), and UKAID via the Transforming Energy Access program. 1PWR also received a loan from the Open Road Alliance. Furthermore, the company has benefited from the advisory and facilitation services of the European programme GET.invest as well as legal services from Sidley Austin and Covington & Burling through the Thomson Reuter Foundation’s TrustLaw program.

“This investment is an excellent opportunity for EDFI ElectriFI to support OnePower in its mission to provide stable electricity to more than 20 000 citizens but also to seven health centers in the country. It was a pleasure to work with a team of strong professionals dedicated to deliver the first solar mini-grids in Lesotho.” explained Quentin De Hoe, ElectriFI Senior Investment Officer at EDFI Management Company.

“We are proud to have supported 1PWR towards reaching this milestone with EDFI ElectriFI and REPP. The company’s persistent engagement and innovative portfolio approach have resulted in a major step for rural electrification in Lesotho, bringing modern energy services to those that need it most,” said Michael Franz, Team Leader at GET.invest.

“I am thrilled to close on this landmark mini-grid transaction with two excellent investors. As a team with deep roots in Lesotho, we are proud that this will not only connect 20,000 people to electricity, but also create renewable energy engineering and manufacturing capacity in the country. I want to extend my gratitude to the hard-working team at 1PWR as well as the numerous partners who have ensured the success of this project, most notably Lesotho’s Ministry of Energy and Meteorology as well as Michael Feldner of GET.invest,” concluded Matthew S. Orosz, CEO of OnePower.