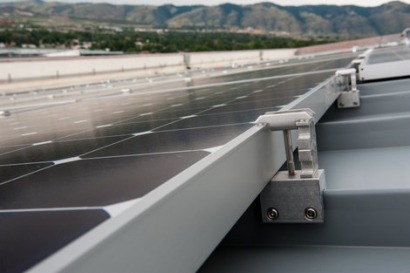 Kyocera and Century Tokyo Leasing jointly established Kyocera TCL Solar LLC in August 2012 with the express aim of constructing and operating multiple utility-scale solar power plants in Japan with the aid of the country’s Feed-in Tariff system. So far, the company has constructed 28 solar power plants, of which 11 are now in operation.

Securing suitable locations for utility-scale solar power plants is becoming more difficult in Japan because of the rapid implementation of the technology. In addition to ground-mount systems and rooftop systems for factory buildings and warehouses, Kyocera TCL Solar will start the floating solar power generation business utilizing the country’s abundant water surfaces. This will take advantage of the many reservoirs throughout Japan that result from the country’s great variation in rainfall. Most of them are used for agricultural and flood-control purposes.

Kyocera is aiming for a total of 60MW of floating solar plant by the end of the fiscal year – 31st March 2015. These installations will utilise floating solar platforms developed and patented by Ciel et Terre, a company that already has a proven record of success after more than three years of operation in France. Century Tokyo Leasing will finance the installations and Kyocera will supply solar modules and associated equipment in addition to construction, maintenance and operation. The installation will incorporate 11,256 255-watt Kyocera modules in total generating approximately 3,300 MWh per year, roughly equivalent to the power requirements of 920 typical households. The electricity will be sold to the local utility through the Feed-in Tariff.

Floating solar power plants generate more electricity than ground-mount and rooftop systems due to the cooling effect of the water. These installations also reduce evaporation and algae growth by shading the water. Ciel et Terre's floating platforms are 100% recyclable, utilizing high-density polyethylene which can withstand ultraviolet rays and corrosion.