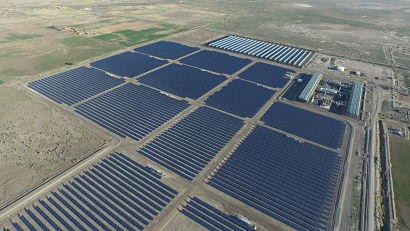 Enel Green Power North America has signed a Power Purchase Agreement with Wynn Las Vegas whereby the resort will buy the energy produced by the 27 MW Wynn Solar Facility, which is due to start generating solar power in the first half of this year. The new solar project is currently under construction in Churchill County, Nevada, adjacent to the existing Stillwater hybrid facility, the first plant in the world to combine the continuous generating capacity of medium enthalpy, binary cycle geothermal power with solar photovoltaic and solar thermal. The new 27 MW PV facility will share the existing connection infrastructure with the geothermal-solar hybrid plant.

Investment in the construction of the facility amounts to approximately $40 million. The power it produces will meet up to 75 percent of Wynn Las Vegas power requirements, the largest percentage of renewable energy used by any resort in the city. The facility covers 160 acres and the power it will generate for the resort is expected to amount to over 43,900 MWh annually.

The plant is also expected to power Wynn Las Vegas’s planned multi-use development, Paradise Park, looking further ahead. This partnership is EGP’s fifth major corporate customer agreement in the US over the last two years.

In 2016, EGP secured its first corporate PPA with Google for the purchase of energy from 200 MW of its 400 MW Cimarron Bend wind farm in Kansas.

In the State of Nevada, EGPNA already manages the 13.4 MW Salt Wells geothermal plant and the aforementioned Stillwater triple hybrid facility comprised of a 33.1 geothermal plant, a 26.4 MWdc photovoltaic solar plant and a 2 MW solar thermal plant. In the state EGPNA has a workforce of about 75 employees, including those at its renewable energy plants and regional office in Reno, Nevada.