First Solar investing up to $1.2B in scaling production of American-made solar by 4.4 GW

Tuesday, 30 August 2022
0
First Solar, Inc. has announced it is planning to invest up to $1.2 billion in scaling production of American-made, responsibly-produced photovoltaic (PV) solar modules, directly supporting the country’s transition to a decarbonised future and enabling the fight against climate change. 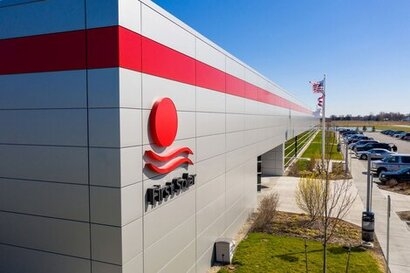 The investment is forecast to expand the company’s ability to produce American-made solar modules for the US solar market to over 10 gigawatts (GW)DC by 2025.

As part of its push to scale US production of solar modules, the company intends to build its fourth, fully vertically integrated domestic factory, with an annual capacity of 3.5 GWDC, in the US Southeast. First Solar expects to invest up to $1 billion in the new factory, which, contingent upon permitting and pending approval of various federal, state, regional, and local incentives, is expected to commence operations in 2025.

Additionally, the company will invest $185 million in upgrading and expanding its Northwest Ohio manufacturing footprint, currently the largest vertically-integrated complex of its kind in the Western Hemisphere, by 0.9 GWDC. As part of its plans, First Solar will invest in expanding the capacity of its two operating facilities in Perrysburg and Lake Township, Ohio, by 0.6 GWDC to 3.6 GWDC of annual Series 6 module capacity. The company will also expand its third Ohio factory, expected to be commissioned in the first half of 2023, to 3.5 GWDC of annual Series 7 module capacity. The expansion will increase First Solar’s total investment in its Ohio manufacturing facilities to over $3 billion, with a cumulative annual production capacity of over 7 GWDC by 2025.

First Solar estimates that the new investment will add at least 850 new manufacturing jobs, taking its total number of direct jobs in the US to over 3,000 people in four states by 2025, which is believed to make it the largest employer in the American solar manufacturing sector. By 2025, First Solar is also expected to support an estimated 15,000 indirect and induced jobs1 as a result of its ongoing and future manufacturing operations.

“In passing the Inflation Reduction Act of 2022, Congress and the Biden-Harris Administration has entrusted our industry with the responsibility of enabling America’s clean energy future and we must meet the moment in a manner that is both timely and sustainable” said Mark Widmar, chief executive officer, First Solar. “This investment is an important step towards achieving self-sufficiency in solar technology, which, in turn, supports America’s energy security ambitions, its deployment of solar at scale, and its ability to lead with innovation. We are proud of the fact that our manufacturing presence in the US is expected to directly and indirectly support over 18,000 jobs across the country by 2025, while our manufacturing investment will add an estimated $3.2 billion2 in value to the US economy, reflecting the impact of solar manufacturing on our country. We are investing in America’s future.”

On its last earnings call on July 28, 2022, First Solar announced a record bookings backlog of 44.3 GWDC. The company has seen demand for its advanced thin film photovoltaic solar modules driven by its ability to provide its customers and partners with long-term supply certainty, lower political and compliance risk, and access to its best available technology through its agile contracting approach.

Designed and developed at its R&D centres in California and Ohio, First Solar’s advanced thin film PV modules have set industry benchmarks for quality, durability, reliability, design, and environmental performance. Each module features a layer of Cadmium Telluride (CadTel) semiconductor that is only three percent the thickness of a human hair. Additionally, the company continues to optimise the amount of semiconductor material used by enhancing its vapour deposition process through continued investment in R&D focused on more efficient module technology with a thinner semiconductor layer. First Solar also operates an advanced recycling programme that provides closed-loop semiconductor recovery for use in new modules.

In addition to its Ohio manufacturing facilities, First Solar also operates factories in Vietnam and Malaysia, and is building its first new manufacturing facility in India, which is scheduled to begin operations in the second half of 2023. On completion of its expansion plans in the United States and India, the company expects to have over 20 GWDC of annual global manufacturing capacity in 2025.