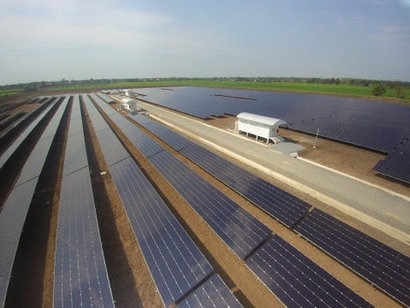 Genex Power Limited has recently achieved financial close for the project which will produce approximately 145,000 megawatt-hours of electricity in its first year of operation. It is located next to the proposed Kidston Pumped Storage Project and Genex Power would like to integrate solar generation from the facility with a pumped hydroelectricity energy storage system.

The first phase of the project will use more than 540,000 First Solar thin-film PV modules. These have been designed to deliver a higher energy yield in hot and humid climates due to their lower temperature coefficient, increasing their output over the course of the plant’s operational life. First Solar modules have been used extensively in Australia and the Kidston project further establishes the company as a leading PV technology supplier to the large-scale solar sector in the country.

“As Australia continues to diversify its renewable energy portfolio, this project is an excellent example of the potential of large-scale solar application and industry best practice” said Ewan Norton-Smith, First Solar's Senior Manager for Business Development in Australia. “The combination of solar energy with pumped-storage hydroelectricity will allow for increasing penetration of renewable energy into the grid and will contribute to the stability of supply in the National Electricity Market. Genex Power is at the forefront of this emerging industry, and with several compelling Australian projects on the horizon, we're proud to be supporting phase one of the project.”

Michael Addison, Genex Power's Managing Director, added that First Solar has an excellent track record of delivering large-scale solar projects in Australia. The electricity from the Kidston Phase One Solar Project will be sold via a Power Purchase Agreement supported by the Queensland Government. The project is also supported by $8.9 million of Commonwealth Government funding through the Australian Renewable Energy Agency. Construction of the project will be managed by UGL Engineering Pty Ltd. and is on schedule to commence in the first half of 2017.

In other news, First Solar has also recently announced it has been awarded the module supply contract for the 140 MW Sun Metals Solar Farm in North Queensland, which will be Australia’s largest solar project once it is completed, utilising more than 1,167,000 First Solar thin-film PV modules. It is expected to produce approximately 270,000 megawatt-hours of energy in its first year of operation.

RCR Tomlinson Limited will manage the engineering, procurement and construction (EPC) of the project. Construction is scheduled to commence in April 2017.

First Solar has also completed the construction of four solar farms in Thailand, totalling 18 MW of capacity, in collaboration with Prime Road Group. The solar farms are located across the Ayutthaya and Pathum Thani Provinces and utilise more than 158,500 First Solar thin-film photovoltaic (PV) modules to produce approximately 29,600 megawatt-hours (MWh) of clean electricity in the first year of operation. The projects were developed under Thailand's Governmental Agency and Agricultural Cooperatives Programme.