Friday, 01 November 2013
0
Robin Whitlock
Recent data from the Department of Energy and Climate Change (DECC) shows that nearly 460,000 homes across the UK have solar panels installed 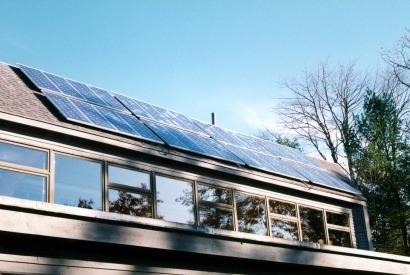 Data released recently by the Department of Energy and Climate Change (DECC) and published on the website of the Solar Trade Association (STA) has revealed that nearly half a million homes in the UK have installed solar panels. This represents a combined peak capacity of 1.3GW, making domestic solar the largest sub-sector of the solar market.

The popularity of solar in the UK has largely resulted from massive international production volumes combined with major efficiencies achieved by the UK solar industry. The cost of solar has dropped exceptionally fast in response such that when the Feed-in Tariff Scheme (FiTS) begin in 2010, domestic solar panels attracted 43p for every unit of power generated. Although domestic solar attracts a much lower FiT, of 14.9p per kilowatt hour – a massive drop of 65 percent in 3 years – returns on investment remain steady. The STA’s solar calculator shows that homes installing a 4kWp system today could expect returns of around 12 percent with payback within 8 years.

“Barely a day goes past without widespread anger about ever-rising energy bills” said STA CEO Paul Barwell. “Nearly half a million UK homes are now much less exposed to frustrating energy bill rises because they have chosen to go solar. It's a particularly clever choice right now because the returns are excellent. People who are fed up with their energy supplier could do no better than to switch to supplying themselves with solar power on their roof.”

The more people that invest in solar the quicker the price will come down, added Mr Barwell. Therefore we need to keep on going down this present path until solar power is cheaper than retail electricity prices so that everyone can have access to cheap green power and stable energy bills.

“Renewables are now giving the customer the real option to switch away from environmentally damaging and increasingly scarce fossil-fuels” Mr Barwell continued. “The old energy sources are running out and putting our future at risk - switch to solar!”

Research has found that the majority of people who switch to solar are motivated by efficiency gains which save money. The STA wants to see 1 million solar roofs across the UK in 2015. With current installation rates around 100,000 solar PV are being installed in the UK every year and if that figure could be doubled, the 2015 target could be achieved. Furthermore, the more solar panels are installed the faster the price of solar falls. The STA is confident that domestic solar could be competitive with retail electricity prices by the end of the decade after which consumers will have the choice to self-supply more cheaply than buying power off the grid.