Monday, 05 January 2015
0
Robin Whitlock
Masdar has announced it has begun construction of four new solar power projects in the Pacific Islands financed by the Abu Dhabi Fund for Development (ADFD). 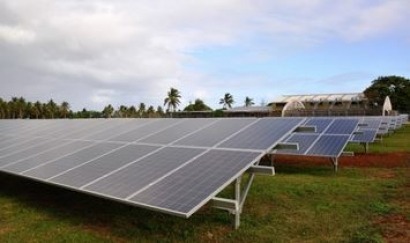 The projects are in Kiribati, Fiji, Tuvalu and Vanuatu and are being funded by ADFD’s $50 million UAE-Pacific Partnership Fund which was launched in March 2013 by His Highness Sheikh Abdullah bin Zayed Al Nayhan, UAE minister of foreign affairs. The fund is administered by UAE’s Directorate of Energy and Climate Change and covers the full project development spectrum, from feasibility studies to operation and maintenance training. Grants under the fund are untied, enabling the participation of local companies.

Collectively, these projects will deliver 1.8 MW of clean energy, saving $2 million of fuel per year. Completion is expected in the second half of 2015. The UAE-Pacific Partnership Fund has supported the delivery of 2.8 MW of renewable energy capacity so far, stretching across six countries in the region which is largely reliant on expensive imported diesel. The latest projects will replace 1.5 million litres of diesel thereby displacing 4,450 tons of carbon dioxide per year.

Masdar has already established a presence in the Pacific Islands, marked by its delivery of the La'a Lahi 'Big Sun' solar plant in Tonga, commissioned in November 2013, and Samoa’s first wind farm, commissioned in August 2014. Both projects were also financed through the UAE-Pacific Partnership Fund.

His Excellency Mohammed Saif Al Suwaidi, ADFD director-general, added that renewables are cost effective and offer real solutions for growth across the Pacific.

The UAE’s efforts to deliver renewable energy projects as a form of development assistance have also included a $350 million fund committed by ADFD in collaboration with the International Renewable Energy Agency (IRENA), sponsoring projects in various countries including Ecuador and Sierra Leone. A 15 MW solar PV plant in the Islamic Republic of Mauritania has also been constructed, representing 10 percent of Mauritania’s energy supply while a 6 MW wind farm in the Republic of Seychelles is now powering more than 2,100 homes.