Friday, 03 February 2012
0
REM
Like the best of break-troughs, it sounds both crazy and imminently practical at the same time. 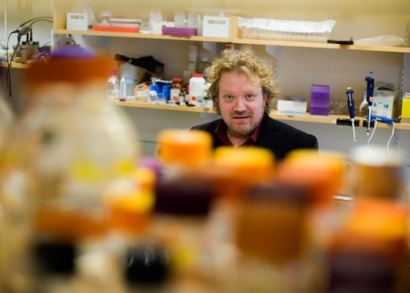 MIT researcher Andreas Mershin says he come up with “Straightforward and inexpensive” method for creating electricity from sunlight using plant grass and other plant materials.

His work appears this week in the open-access journal Scientific Reports. It builds on a project begun eight years ago by Shuguang Zhang, a principal research scientist and associate director at MIT’s Center for Biomedical Engineering.

Zhang was senior author of the new paper along with Michael Graetzel of Switzerland’s École Polytechnique Fédérale de Lausanne.

In his original work, Zhang was able to enlist a complex of molecules known as photosystem-I (PS-I), the tiny structures within plant cells that carry out photosynthesis. Zhang and colleagues derived the PS-I from plants, stabilized it chemically and formed a layer on a glass substrate that could — like a conventional photovoltaic cell — produce an electric current when exposed to light.

But that early system had some drawbacks. Assembling and stabilizing it required expensive chemicals and sophisticated lab equipment. What’s more, the resulting solar cell was weak: Its efficiency was several orders of magnitude too low to be of any use, meaning it had to be blasted with a high-power laser to produce any current at all.

Now Mershin says the process has been simplified to the point that virtually any lab could replicate it allowing researchers around the world to start exploring the process and making further improvements.

The new system’s efficiency is 10,000 times greater than in the previous version — although in converting just 0.1 percent of sunlight’s energy to electricity, it still needs to improve another tenfold or so to become useful, he says.

Mershin thinks that because he and his colleagues have now lowered the barrier to entry for further work on these materials, progress toward improving their efficiency should be rapid. Ultimately, once the efficiency reaches 1 or 2 percent, he says, that will be good enough to be useful, because the ingredients are so cheap and the processing so simple.

“You can use anything green, even grass clippings” as the raw material, he says — in some cases, waste that people would otherwise pay to have hauled away. While centrifuges were used to concentrate the PS-I molecules, the team has proposed a way to achieve this concentration by using inexpensive membranes for filtration. No special laboratory conditions are needed, Mershin says. “It can be very dirty and it still works, because of the way nature has designed it. Nature works in dirty environments — it’s the result of billions of experiments over billions of years.”

Essentially, Mershin says, within a few years a villager in a remote, off-grid location could “take that bag, mix it with anything green and paint it on the roof” to start producing power, which could then charge cellphones or lanterns. Today, the most widely used source of lighting in such locations is kerosene lanterns — “the most expensive, most unhealthy” form of lighting there is, he says. “Nighttime illumination is the number one way to get out of poverty,” he adds, because it enables people who work in the fields all day to read at night and get an education.

The research was funded in part by an unrestricted grant from Intel Corp., and also included researchers at the University of Tennessee.