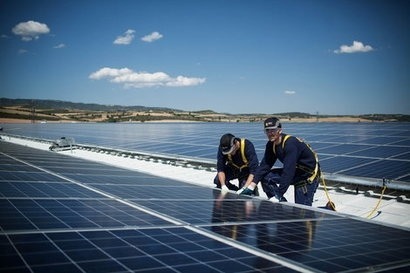 The study was published just in time for the ongoing UN Climate Change Conference in Bonn, Germany, this week. It highlights the potential of solar energy to close the CO2 emissions gap, clearly showing that, based on the COP21 targets set during the UN Climate Change Conference in Paris last December, solar can make a significant contribution. However, to be on track by 2025 to close the emissions gap and avoid further acceleration of climate change impacts, the potential solar capacity ramp-up is far larger than industry analysts expect, resulting in up to 4.8 terrawatts above current forecast of cumulated new solar capacity by 2025.

At COP22, to be held later this year, governments are targeting an accord on the rule book of the Paris Agreement, hammering out concrete steps for taking the agreement into force. To meet the targets agreed in Paris, there will have to be quick and substantial reductions in greenhouse gas emissions in the decades ahead. The REC study is one of the first in the world to calculate the specific impact of COP 21 for the solar industry.

One key area investigated is the shortfall in many countries around the world between renewable energy commitments and emission reduction targets. For example, the German power sector will have to reduce emissions by 1.152 Gigatonnes (Gt) by 2025 – equivalent to taking 50 million cars off the road – to be on track for the COP 21 target of keeping the global temperature rise below 1.5 ºC. The REC task force has calculated that Germany will have to almost fully eliminate coal (currently 45 percent of the country’s electricity generation mix) in order to close its cumulative emissions gap by 2025. In order to replace coal and deliver on the commitment to phase out nuclear, Germany will need to add an average 8.31 GW of solar capacity every year – ramping up solar by 4.6 times the current forecast.

Coal is an issue in all the countries investigated by the report. The Netherlands, for instance, is the fifth-worst environmental performer in Europe on the 2015 Environmental Performance Index, with increased use of coal the reason for the poor ranking. The REC study calculates that a sharp ramp-up of solar and wind energy (with cumulative additional solar capacity of 14 GW, less than double the current forecast) will make coal fully dispensable as of 2023.

In the USA, cumulative solar PV installations of approximately 790 GW will be required to keep the country on track to meet its share of closing the emissions gap by 2025 in the power industry. That is four times the current forecast installations through 2025. For Japan, the world’s fifth largest emissions emitter, the REC calculations demonstrate that the country’s COP21 pledge to reduce emissions by 26 percent by 2030 compared to 2013 levels falls short of what would be required considering Japan’s 3 percent share in global emissions. Using solar to close part of the gap, Japan would need cumulative additional solar capacity of 250 GW by 2025, more than three times the current forecast.

“The results of our calculations are eye-opening” said Steve O’Neil, CEO at REC. “Comparing emissions forecasts under current policies and to limit temperature increase to 1.5ºC, the world needs to reduce a significant cumulative amount of 144 Gt of CO2 emissions by 2025. Since one third of energy-related CO2 emissions worldwide are from the power sector, REC believes that solar can make a significant contribution – specifically, 25 percent – to reducing emissions, which in turn will contribute to limiting the temperature increase. And the earlier the world begins to accelerate the pace of installations, the less capacity will be required at the end.”

As REC has calculated, this will require a sharp ramp-up of solar capacity, reaching installations of 1.7 terawatts in 2025 alone, nine times the forecast based on the current trend. REC will continue to leverage this incredible momentum for solar with expanded capacities, new business models and increased activities in new emerging markets.

Executive summaries of the results are already available, but the complete study will be published for the Intersolar Europe exhibition and conference taking place between 22nd and 24th June, where REC will be present at booth A2.380.