Friday, 23 May 2014
0
Robin Whitlock
A world expert on solar panels has explained how his pioneering work is set to significantly improve the performance of solar panels whilst simultaneously contributing to their cost being reduced by half. 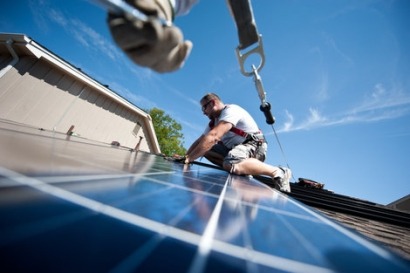 Professor Stuart Wenham from the University of New South Wales (UNSW Australia) presented his work at a lecture in Central London this week where he also officially received the Institution of Engineering and Technology’s (IET) A F Harvey Engineering Research Prize of £300,000. Professor Wenham was chosen from high calibre candidates across the world to be awarded the IET’s biggest prize.

The prize money will enable Professor Wenham to continue his ground-breaking work which has uncovered a mechanism to control hydrogen atoms in order to correct deficiencies in silicon – the most costly part of a solar cell. The process allows lower-quality silicon to outperform solar cells made from better quality materials.

“It is a great honour to receive the A F Harvey Engineering Prize and the international recognition that it brings to our breakthrough technology” said Professor Wenham. “Our research team at UNSW, which has held the world record in silicon solar cell efficiency for many years, has discovered how to control the charge state of hydrogen atoms in silicon and we will be working with the world’s biggest manufacturers to commercialise this low-cost technology. This generous prize will go a long way to helping us take this research to the next stage.”

IET President, Barry Brooks, added that the Professor has played a pivotal role in the wide scale development of silicon solar cell technology.

“His pioneering research and internationally recognised leadership in the field will enable commercial exploitation of the technology for the benefit of the global community seeking renewable energy solutions at affordable prices” Mr Brooks continued. “He is a truly deserving recipient of the IET A F Harvey Engineering Prize and an inspiration to all engineers.”

Professor Wenham’s lecture is available to watch live online at http://www.theiet.org/harvey. He is the third recipient of the IET A F Harvey Engineering Research Prize, which is named after IET member Dr A F Harvey, who bequeathed a generous sum of money to the IET for a Trust Fund to be set up in his name after his death to be used for the advancement of research into the fields of medical, microwave, laser or radar engineering.

Institution of Engineering and Technology (IET)