Monday, 28 March 2022
0
REM
Nextracker has been selected to provide its smart solar trackers and TrueCapture™  technology for phase one of the Sudair Solar PV Plant (450 MW), Saudi Arabia's largest solar power plant currently under construction in Sudair. When complete, it will provide clean energy to meet the needs of 185,000 homes and reduce carbon emissions by 2.9 tons annually. 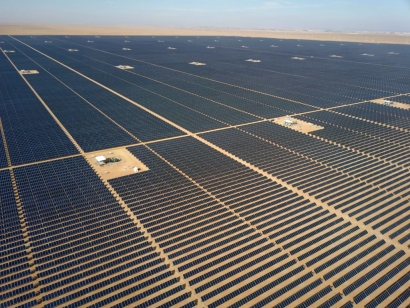 Nextracker is the global market leader in yield-enhancing PV system technology and solar trackers which are recognized for maximum energy production and efficiency and endorsed by Independent Engineers and Independent Certifying companies. The selection of Nextracker bifacial optimized tracker solution and TrueCapture technology will help boost the energy generation profile of Sudair Solar PV Project.

Kashif Rana, Chief Financial Officer and Acting Chief Portfolio Management Officer of ACWA Power, said, “Sudair Solar PV IPP, which is one of the largest solar plants in the world, is a strategically important pillar of Saudi Arabia’s Net Zero commitment by 2060 as well as the nation’s ambitious target to derive 50% percent of electricity from renewable sources by 2030. We view Nextracker as being a key partner in delivering the most efficient energy production at the lowest possible cost.”

Marco Garcia, Nextracker Chief Commercial Officer, said, “Bifacial optimized trackers and TrueCapture technology are particularly well suited to maximize solar energy production on power plant facilities in desert environments. The desert has a very high albedo, or brightness of the ground. Over the life of a solar plant, this makes a significant difference in the total amount of energy produced, bringing great value to our customers with the lowest levelized cost of energy.”

L&T released the order for Nextracker solar trackers and TrueCapture technology for part of the first phase of Sudair. Nextracker technology enables solar panels to track the path of the sun to maximize energy production versus fixed tilt ground mount applications.

The use of local manufacturers for Sudair’s steel production needs will also have a significant economic impact, Marco Garcia said. Nextracker works with local Saudi steel manufacturing partners for the installation of domestic solar projects as well for steel export to support the development of solar projects around the world.

In 2021, Nextracker exported more than 20,000 tons of Saudi steel valued at greater than $30 million to help support the installation of the company’s NX Horizon™  and NX Gemini™ smart solar trackers at new solar plants in numerous countries including the U.S. Nextracker also used local streel manufacturers for all steel required to support the installation of Nextracker solar trackers and technology at the 405 MW Sakaka Solar Plant in Al Jouf, which was also developed by ACWA Power and consortium partners. The Sakaka installation required 14,000 tons of steel that represented greater than 45% of the total tracker value.

The Sudair Solar Power project is being developed in line with Saudi Arabia’s National Renewable Energy Programme (NREP) which aims to achieve 58.7GW of renewable energy capacity by 2030. PIF has been entrusted by the Kingdom to provide for 70% of the target capacity. It is being developed on a 30-square-kilometer site southeast of Al Majmahh in Riyadh Province.

The installation of Nextracker solar trackers and technology is expected to start in the second quarter of 2022.