Tuesday, 24 November 2020
0
Solar tracker market trends are driven by the growing adoption of clean energy technologies along with advancement in the tracker systems for optimum solar energy utilization.Solar trackers are devices with photovoltaic panels that accurately track the path of the sun throughout the day. 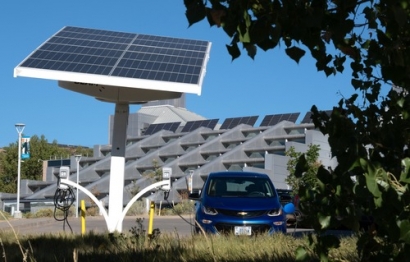 The tracking system adjusts the face of the reflective surfaces/solar panel to follow solar movement. The deliver nearly 50% more energy per year when compared to standard stationary solar panels.Solar trackers are witnessing heavy adoption in both residential and commercial-grade solar panels due to more efficient and improved solar trapping technology.

Governments across the globe are undertaking various initiatives to promote the adoption of solar panels which may positively impact solar tracker adoption. The U.S. IRS has established a provision to the federal solar investment ITC (income tax credit) law, safe harbor that enables customers to preserve tax credit of the current year by initiating construction on a solar project.

Rise in number of new solar projects with the new government initiatives will foster industry size over the coming years. Estimates suggest that global solar tracker market will witness an annual installation of over 35 GW through 2026.

Growing demand for efficient solar trapping for optimum energy utilization is driving the demand for solar tracking systems.Solar tracker industry is witnessing heavy demand for single axis trackers due to cost effectiveness and high reliability index of the product.

Single axis trackers are further classified according to vertical axis and horizontal axis. Integration of digital monitoring systems and minimal maintenance costs of solar tracker is further propelling product demand. In 2019, photovoltaic tracker vendors shipped 1.5 to 2 times as many trackers as they did in the previous year to meet the growing demand.

Government initiatives in the U.S.

Ongoing efforts and initiatives for promoting energy efficiency in the United States along with rapid adoption of solar trackers across industrial and residential sectors has supported the industry outlook. Most of the residential and other small-scale solar PV installations across the region are utilizing solar trackers due to the product’s ability to expand capacity utilization for the system.

In 2019, U.S accounted for 50% of global tracker shipments and is growing 226% year-over-year, which is the maximum growth seen in any region.Moreover, the safe harboring law set forth by the government has enabled commercial entities and homeowners to deduct a substantial portion of the cost of their solar panel installation from their income taxes, which may further boost the industry expansion.

The Middle East solar tracker market share is gaining traction on account of the rising demand for electricity to sustain the expanding commercial industry base across the region. Rise in investments by the private and commercial institution as well as the regional government towards the development of new solar power systems, in line with growing decentralized energy generation,will positively impact solar trackers deployment.

For instance, the U.A.E. announced plans in June 2019 to invest approximately $163 billion in projects to meet the region’s growing electricity demand from renewable sources, including nuclear, solar, waste-to-energy and geothermal.

A qualified Engineering graduate, Vinisha Joshi takes pride in her writing. Presently, she pens insightful articles on business, core industry, technology, and the like. Creativity comes naturally to her, and Vinisha makes sure to effectively combine the same with her technical expertise in the articles she writes.