Wednesday, 22 April 2020
0
REM
Five decades ago, an idea sprouted into an event that grew into a movement, which on April 22,  its 50th anniversary, is recognized as Earth Day—a global day of awareness and a celebration of principle, responsibility, and sustainability. 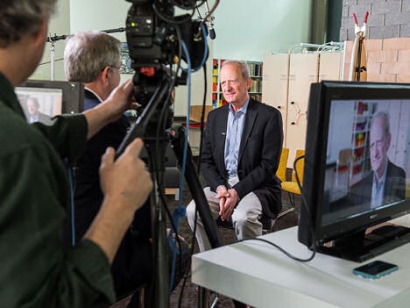 Hayes founded the Earth Day Network. The research NREL conducts every day aligns seamlessly with the network’s mission to build the world’s largest environmental movement to drive transformative change for people and planet. Hayes recognized this, observing “… a huge part of the answer was with the issues SERI was addressing then and NREL is addressing now—the transition to a super-efficient world that was run largely by renewable energy sources.”

In 1970, Nelson and Hayes struggled over what to call the event. They considered several options, including E-Day, Green Day, and Ecology Day, before finally settling on Earth Day.

“‘Earth’ just had something about it that appealed to people,” Hayes said. “Interestingly, it translated fairly transparently into every language. In 1970, it was a purely national event. It would have been ‘U.S. environment day.’ In 1990, we took it international, and now it has truly become a planetary day and Earth Day and now we have moved into a series of issues that cannot be solved by any one country working alone.”

According to Hayes, the 1970 New York City demonstration was the largest demonstration ever in the city at that time. In 1990, the Earth Day Network had expanded to 141 countries. In 2000, the network grew to more than 180 countries, including China for the first time. Earth Day 2010 saw 75,000 partners from 192 countries engaged in activities.

Similar to the Earth Day Network, NREL partners with companies and organizations all over the world, from industry and academia to federal, state, and local governments advancing clean energy technologies.

Researching technological pathways to a sustainable, clean energy future makes every day Earth Day at NREL, but during Earth Week and on Earth Day, “NRELians”  work to engage people in discussion, celebration, and recognition of the event’s mission. This year, because of the COVID-19 outbreak, Earth Day 2020 and events leading to Earth Day have been and will continue to be digital.

Earth Day 2020 beyond the energy-efficient walls of NREL is also subject to a modified format, much to the chagrin of Hayes, who has been leading a team of around 80 people for the past two years planning the 50th anniversary event.

While social distancing threw a wrench into the best-laid plans for Hayes and his team, like NREL’s agenda, the global event is pivoting nicely, and the show will go on.

“We have a lot of things coming down now,” Hayes said. “It’s the 22 activities you can engage in as the things you can get involved in to celebrate Earth Day—changes in diet to changes in transportation. The average person who is a stockbroker or a teacher, what you can do tends to be buy the most efficient car that meets your need and shift to electricity as soon as possible. Power your car with the solar panels on your roof, eat less meat, consider what kinds of fibers are in your clothes, and energy efficiency with how your house operates.”

Despite the global, digital event, part of the disappointment for Hayes is that this, the 50th anniversary, “was going to be where I signed off,” he said. “After 50 years, this was my final hurrah.”

Photo: On April 20, 2015, former NREL Director Denis Hayes is interviewed at the laboratory for a history project. An environmental activist and proponent of solar power, Hayes rose to prominence in 1970 as the national coordinator for the first Earth Day. He then founded the Earth Day Network and expanded it to more than 180 nations.