NREL releases data on impact of clouds on solar output 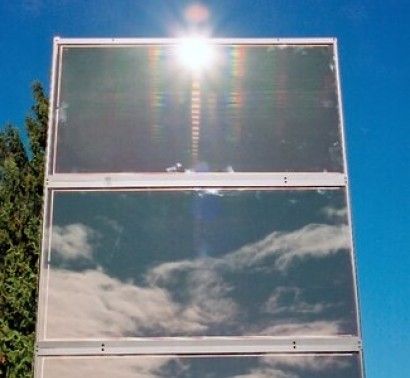 The sun reliably beams down on the Earth every day, and just as reliably clouds pass by each day, shading flora and fauna, buildings and mountains, for better or worse. What happens when those clouds pass between the sun and a large solar energy installation? How much is lost in the effort to convert the sun’s photons into electrons for electricity? Those questions went largely unanswered until recently. Seventeen measurement stations near Hawaii’s Honolulu International Airport on the island of Oahu have been used to collect data at one-second intervals over the course of a year, which can then be used to predict what PV outputs might be at one-second intervals for medium-sized and large PV systems.

The data set is of great interest to utilities, developers of large-scale photovoltaic (PV) systems, forecasters, system operators, laboratories and universities, as a better understanding of the characteristics of cloud shadows that pass across a large PV system will enable them to devise strategies to better manage those fluctuations so the grid isn’t adversely impacted.

The collected data “allow us to set up a solar-monitoring network that simulates exactly how clouds would impact a large photovoltaic system,” said NREL Senior Scientist David Renne. “The time-synch data are unique. All 17 stations make a one-second measurement at exactly the same time. This allows the array to “see” clouds moving through and simulates how a PV system might behave.”

“Each of the 17 measurement stations measure the solar energy in the sun’s visible spectrum that reaches a horizontal surface at ground level,” Renne said. Researchers from NREL’s Solar Radiation Research Laboratory designed the equipment so that a global positioning satellite system can be used to provide concurrent 1-second measurements for each of the 17 stations.

“The data have to be collected every second because PV systems respond very quickly to shadows,” Renne said. “We have to make sure we really capture the detailed ramp characteristics,” which are dips and jumps in PV output based on factors such as clouds. The data set can model utility-scale systems up to 30 megawatts, Renne noted. “Clouds can cause pretty significant jumps or ramps over a very short period of time.” Renne said that as solar power becomes a greater part of the energy mix, those jumps can cause fluctuations in the grid, which if unmitigated can cause surges, fluctuations, and headaches for the utility operator.

Storage of the electricity generated by the sun is one way to handle those fluctuations. Another is to stabilize the grid via infrastructure and software packages.

“If they have good statistical information about cloud patterns, they can design systems and wire them together along certain orientations to minimize the impact of cloud passage, and dampen those fluctuations,” Renne said.

One new insight is that with very large arrays of solar panels, there is a smoothing of the fluctuation, compared to the sharp spikes and plunges that can happen when a cloud passes by a single panel or small rooftop array.

The DOE-funded study by NREL supports the Hawaii Clean Energy Initiative (HCEI), a multifaceted programme to substantially increase the use of renewable energy in Hawaii. The study also includes General Electric, the Hawaiian Electric Company and the Hawaiian National Energy Institute. The data collected for the Oahu Solar Energy Study belongs to the partners working on the HCEI, but NREL can share the knowledge about building a data set based on one-second intervals with others around the nation and the world. One year’s worth of the data can be found on NREL’s Measurement and Instrumentation Data Center (MIDC) website.