Friday, 10 December 2021
0
Robin Whitlock
National Renewable Energy Laboratory (NREL) has partnered with Antora Energy and the Massachusetts Institute of Technology (MIT) over the past three years to engage in two separate projects in thermophotovoltaic (TPV) technology. 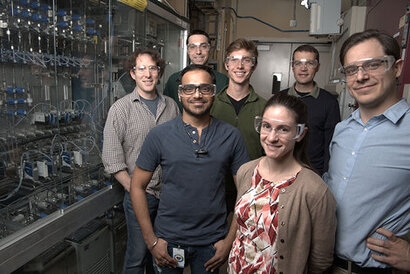 TPV captures the energy radiated as infrared light from hot objects and converts that radiation to electricity at high efficiency using specially designed photovoltaic cells. TPV technology is not a new discovery. During the 1990s, NREL conducted TPV research led by now-retired scientists Tim Coutts and Mark Wanlass. The research was funded by the US Navy in search of an alternative heat source for military applications.

Now, this technology is making a return. NREL has a long history of developing record-efficiency photovoltaic devices that shape commercial applications. When collaborating with NREL, partners work with researchers who have designed record-setting and award-winning photovoltaic technologies such as solar cells and TPV cells, including rapid manufacturing with photolithographic processing and multiple vapor-phase epitaxy techniques.

TPV has the ability to grow into a solution for devices and systems for a range of high-impact applications where the robustness provided by the absence of moving parts is crucial. NREL is comprehensively situated to advance TPV technology with breakthrough potential. To reach this potential, NREL is helping partners to move their ideas to market and reach benchmarks for performance and efficiency. Both the Antora Energy and MIT projects have led to record efficiencies of more than 35% - a very competitive level of performance.

Not only does NREL’s team have the capacity to demonstrate record efficiencies, but it can also model, test, simulate, and integrate experiments with real power hardware to develop methods for real-time co-optimisation with the grid. In NREL’s Energy Systems Integration Facility, the systems integration infrastructure allows the study of technological performance within larger systems. By using models and analytical resources to study the supply chain, electricity costs, and future market deployment of TPV devices, NREL helps partners foresee the impact of new products in a range of techno-economic scenarios.

With funding from the Advanced Research Projects Agency-Energy (ARPA-E) and through the Shell GameChanger Accelerator Powered by NREL (GCxN), Antora Energy used NREL’s fabrication facilities to develop larger TPV cells and move its technology toward commercialisation and grid-scale energy storage.

Antora’s technology stores energy in the form of high-temperature heat, using Earth-abundant solids that are heated to over 1000°C and insulated. While most chemical battery technologies only have mid-duration storage, Antora’s can provide power for days. Antora estimates that this project has resulted in energy storage that costs less than 1/20th of other conventional battery technologies.

NREL is also working on another thermal-based grid energy storage project with an MIT research group headed by Professor Asegun Henry in the Department of Mechanical Engineering, which aims to eventually commercialize TPV technology for energy storage applications. The TPV aspect of this project, also funded by ARPA-E, focuses on using novel high-bandgap device architectures to improve TPV efficiencies and studies cost-reduction pathways for manufacturing. The MIT project will continue through the end of February 2022.

“We’d love to continue working on these projects” said lead NREL researcher Myles Steiner. “There has never been a thermal-related PV application that’s been fully commercialised - cells are expensive, and efficiencies haven’t been very high, and systems can be complex, but these projects have pushed efficiencies to record-level highs, mid-30s and above. Couple that with hopeful reductions in costs, and that could be enabling.”

NREL researchers have recently begun other projects in the TPV field. Eric Tervo is leading a new Laboratory Directed Research and Development (LDRD) project that investigates the performance of low-bandgap TPV cells when the heat source is situated only 100 nm away from the cell, a distance about 1,000 times smaller than the diameter of a human hair.

“Maintaining a large temperature difference between the heat source and the cell at this scale, and over a sizeable area, is very challenging” added Tervo, the NREL Director’s Nozik Postdoctoral Fellow. “But the power density generated by this kind of near-field TPV system can be significantly higher than in a more traditional TPV system, and that can open a wide variety of new application spaces.”

The research behind TPV technology could change renewable energy for the future. NREL is creating the materials and methods that will allow TPV to have an impact in applications that include power recovery from waste industrial heat, portable electronics, quiet electric generation from nuclear energy, and grid storage. The path to commercialisation for TPV is well underway.