Monday, 28 November 2022
0
Robin Whitlock
PlasticBean (an Archwey company) has announced a partnership with EDPR Sunseap, Singapore’s leading clean energy solutions provider, to orchestrate a master plan for the usage of recycled plastics as a main ingredient for floating solar. 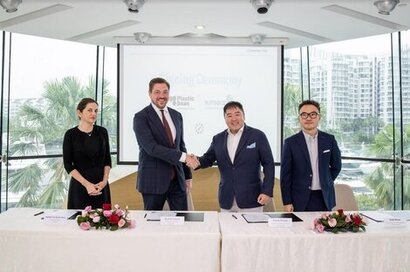 Pontoons built using Bluewave, a recycled material made entirely from ocean-bound and local post-consumer plastic waste, will support the solar farm, significantly reducing the amount of virgin plastic used in construction, a big step toward a 100 percent renewable future.

With available land increasingly scarce across the globe, floating solar farms are a way to build enormous generators of renewable energy without damaging any land. They can be constructed on any large body of water, like lakes or reservoirs, where the cooling effect of the water makes the solar panels more efficient than land-based panels. They have the potential to generate far more energy than roof or ground-mounted systems.

Until today, floating solar has been constructed using 100 percent virgin plastic pontoons, derived from oil, making them a drain on the planet even as they create renewable energy. Archwey’s thermoplastic Bluewave removes the need for virgin plastic. Collected at riverbanks and coastal areas in some of the most polluted regions in the world, it gives new life to plastic waste that would otherwise end up in our oceans.

100 percent recycled and recyclable, Bluewave can be used to make countless new products, including solar farm pontoons. In the past 18 months alone, Archwey has recycled 32,500 tonnes of plastic waste that would otherwise have found its way to the ocean. Bluewave’s circular model not only removes waste and prevents the use of more oil, it creates far less greenhouse gas emissions during manufacture, therefore ensuring decarbonisation.

EDPR Sunseap is a tactical partner in Archwey’s vision for a world where no resources are taken from Planet Earth, but existing materials are instead reused and recycled.

“Using virgin plastic in the skeleton frame construction of renewable energy farms defeats the purpose - taking precious fossil fuels from the planet while aiming to reduce its dependency on oil” said Archwey CEO Sjoerd Fauser. “By using Bluewave, a recycled and recyclable material, in the construction of floating solar farms we can dramatically reduce the use of virgin plastic and help make this industry genuinely sustainable. It’s essential that the world ends its dependence on fossil fuels and not just as an energy source. Virgin plastic, made using oil, is one of the planet’s biggest pollutants. Less than 9 percent of all plastic produced is recycled. That’s over 364 million tonnes of plastic being thrown away every year. This strategic partnership with EDPR Sunseap, a pioneering energy provider, is an important milestone in our mission to reverse the damage humanity has done to our planet over the past century. Like us, they believe a better future is possible. This is a huge step to a truly sustainable world.”