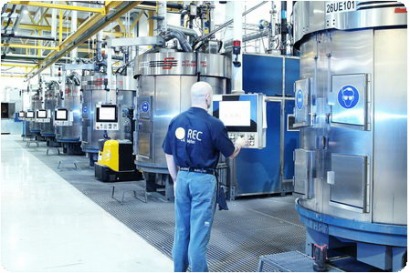 The prize was awarded by the photovoltaic (PV) industry magazine Solar and was announced during EU PVSEC, the solar industry’s most important technology conference. The winners were selected by voters representing leading players in the solar industry, and this is the second time in a row that REC has received the Solar Industry Award.

REC’s Granular Polysilicon, produced in the FBR process and marketed as NextSi, additionally offers several benefits to the end user as it enhances the efficiency of the PV ingot manufacturing process by increasing the amount of yieldable ingot that can be harvested during a production cycle, thereby increasing throughput, reducing production cost and increasing profit.

“I am excited to accept this award recognising the efforts of our REC Silicon team in developing the FBR technology and bringing it to scale,” commented Ron Reis, Vice President, Technology, REC Silicon. “The FBR technology not only solidifies our leading cost position as a producer of polysilicon, it also provides our customers with a quality product they find very effective in their production processes.”

REC produces polysilicon at two facilities located in the Western US and has an industry leading position, being the number one producer of Granular Polysilicon, Float Zone (high purity polysilicon) and silane gases.

Founded in Norway in 1996, REC is an international solar company employing about 4,000 people worldwide with revenues approximately € 1.7 billion in 2010.