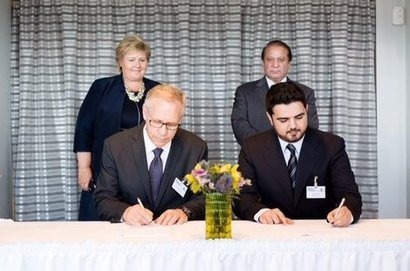 Completion of the development and financing of the solar energy plants, with a total capacity of 150 MW, are expected towards the end of 2015, with construction starting in the first quarter of 2016. The plants will be located in Pakistan’s Sindh province and will involve an initial investment of nearly $300 million. The projects consist of three plants generating 50 MW each. However, an additional 150 MW is planned for a second stage of development, bringing the total investment to nearly $600 million. The initial 150 MW will be able to power 150,000 homes during peak daytime hours.

“This project is an important landmark in Scatec Solar's journey to provide clean and affordable energy in developing countries” said Mr Carlsen. “The Pakistani authorities have shown their commitment to addressing the nation's rising energy demand.”

Mr. Usman Ahmad added that access to energy is a prerequisite to improve standard of living in Pakistan and that Nizam Energy is keen to increase the role of clean solar power in the country’s energy mix.

The projects will help to counter global climate change by reducing carbon emissions by about 300,000 tons when complete. They are also aimed to stimulate investment from global and local investors and will provide more than 1,000 jobs during the construction phase. The long term operation of the plants will create 60 jobs. Scatec Solar will also put special emphasis on the transfer of technical expertise to the local community.

Pakistan's Central Power Purchasing Agency (CPPA) will purchase the electricity generated by the joint venture for a duration of 25 years and will receive 50  percent of the revenues from Carbon Credits generated by the project. The projects will add an estimated 290 GWh of electricity per year to the grid, increasing to about 580 GWh when the second stage is complete. Pakistan is currently facing an acute energy crisis in which the electricity shortfall has exceeded 7,000 MW, about one-third of peak demand during extreme periods. Resolution of this deficit could increase Pakistan’s GDP by as much as 2 percent annually through additional production, exports and employment.

Scatec Solar ASA will be the majority shareholder in the project but will also be responsible for the financing, turnkey construction, operation and maintenance of the solar plants. Nizam Energy will be the co-developer, co-investor and a potential sub-contractor during the construction and operation phase.