Monday, 16 March 2015
0
Robin Whitlock
Scatec Solar has signed a Memorandum of Understanding with Egypt's New and Renewable Energy Authority (NREA) to develop 50 MW of solar PV power in the country. 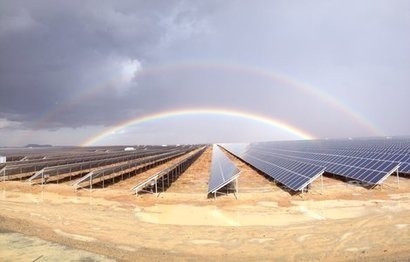 The MoU secures the land required for the project which will be developed under Egypt’s new Feed-In Tariff Scheme (FIT). The document was signed at the “Egypt for the Future” event with NREA’s Chairman Mohamed Salah El-Sobki in the presence of Norway's Minister of Foreign Affairs, Mr Børge Brende and Dr Mohamed Shaker El-Markabi, Minister of Electricity & Renewable Energy in the Arab Republic of Egypt. It will enable Scatec Solar to develop, finance, build, own and operate the first 50 MW of solar power plant as part of the first phase of the Feed-in Tariff programme for solar and wind energy launched by the Government of Egypt.

Scatec Solar is aiming to develop, build, own and operate 150 - 200 MW of new solar power plants in Egypt over the next two-three years, investing more than $300 million with its finance partners.

“Solar has the potential to become a huge new source of power in Egypt” said Raymond Carlsen, CEO of Scatec Solar. “Experience shows that such a program also can become a much-needed boost to employment, skills development as well as industrial and social development in Egypt.”

Egypt invited proposals from foreign wind and solar developers for the construction of two 2000 MW utility-scale solar and wind power plants, as well as 300 MW of decentralised solar over the period 2015-2017. The government is aiming to secure a rapid deployment with the first phase of projects to start construction in 2015. It’s target is 20 percent of installed energy capacity from renewables by 2022. This implies the installation of 12 GW of new renewable energy capacity over the next seven years, of which around half could be solar. The installation of 6 GW of solar will require around $9-10 billion of foreign investment, leading to many times this amount in reduced costs from a fall in imports of fossil fuels.

Scatec Solar has maintained a presence in Jordan since 2011 and in Egypt since 2013. The company successfully raised $135 million to build three solar plants in Jordan with a combined capacity of 43 MW, to be connected to the grid in 2015. In Egypt, alongside the FiT programme, Scatec is shortlisted to participate in the country's tender program for 200 MW in Kom-Ombo.