Friday, 15 March 2019
1
REM
The European Investment Bank and Palestine Investment Fund have signed a loan agreement worth $18 million to finance the installation of rooftop photovoltaic  systems on 500 public schools in the West Bank. The EIB’s investment, which falls under the Economic Resilience Initiative will generate 35 MW of clean energy enough to power more than 16,000 houses across the West Bank. 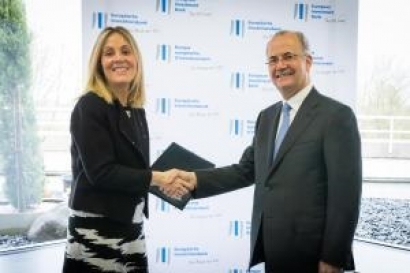 The financing agreement was signed in a ceremony hosted by the European Investment Bank in Luxembourg by Emma Navarro, Vice President of the EIB, Dr. Mohammad Mustafa, Chairman of the Board of Directors of the PIF, and Azem Bishara, CEO of Massader.

Navarro said, “The agreement will help to harness the energy from the sun to power houses as well as schools. This will improve the availability of electricity supply in the West Bank. As the Bank of the European Union, we seek to promote renewable energy with the purpose of improving living conditions of Palestinian residents and improving infrastructure for business.”

Dr. Mustafa added, “PIF aims at contributing to laying the foundation for an innovative, sustainable and knowledge based Palestinian economy. We are proud of this agreement and aspire that this would be the start for a strong and solid cooperation between PIF and EIB.”

The EIB’s financing will be used for the installation of rooftop PV panels on schools dispersed throughout the West Bank and East Jerusalem. Massader, a PIF’s wholly owned subsidiary, will implement the project. The company will use the electricity generated to power schools at no cost, as offset against using the rooftops, and will sell the remaining electricity at a competitive tariff to four electricity distribution companies operating in the area.

This project, which falls under the European Union External Lending Mandate to the EIB, contributes to the development of social and economic infrastructure and climate change mitigation. It supports economic resilience of Palestine through a long-term investment in decentralized energy systems and it contributes to a reduced reliance on electricity imports. It will result in relative emissions savings estimated at 31000 tons of CO2 equivalent per annum, based on the avoidance of electricity generation from the existing and new thermal plants.

The ministry of education, which will enjoy electricity for the relevant schools, will raise awareness of children about climate change and the benefits of renewable energy as a source of sustainable energy.

Tags: Electricity , Europe , Climate change , Renewable energy , CO2 , Photovoltaic , PV , Saving , Solar
Add a comment
A.J.
What does 35MW translates to in terms of daily household usage, or daily available power in kWh per household? What\'s the median electricity consumption per household in this area? My math is probably wrong here, but 35MW of solar sounds 35,000 kW of installed instantaneous solar capacity. If the sun shines only 8 hours per day for these panels, that\'s 280,000kWh/day of power generated. Assume massive efficiency and other transmission losses, giving 200,000kWh/day. in what world does this translate to 16,000 households? That\'s about 12.5kWh/day capacity per household if it\'s evenly distributed among 16,000. That\'s a very high number -- are you treating households in the West Bank McMansions in in the states? I love off grid in a desert area, and have about 500W of solar capacity, generating roughly 4kWh/day, of which I use less than 1kWh/day. if your goal was to give minimal emergency 5V or 12V lighting and electronics charging and communications power for these communities, 35MW would cover 1.6 million households. If you were trying to deliver something close to my living standard, 35MW would power over 100k homes.
energy saving