Wednesday, 13 October 2021
0
Robin Whitlock
Senator Patrick Leahy, (Democrat, Vermont), joined representatives from Middlebury College, Encore Renewable Energy, Green Mountain Power (GMP), the state of Vermont, and the town of Middlebury on October 12 to break ground on a new five-megawatt solar project in Middlebury that will provide the College with about 30 percent of its total electricity usage. 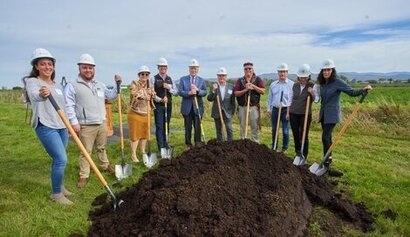 The collaborative partnership will help the College reach its climate goals while expanding local, renewable energy production in Vermont. Middlebury College will buy 100 percent of the electricity generated at the site as part of its ambitious Energy2028 initiative, which calls for the College's use of 100 percent renewable energy by 2028.

After a blessing from Don Stevens, chief of the Nulhegan Band of the Coosuk-Abenaki Nation, the groundbreaking event continued with remarks from the speakers.

“For many years, along with other Vermont leaders, I have been spotlighting the economic benefits to come with going ‘all-in’ on investments in clean energy and green infrastructure” said Senator Leahy. “As we grapple with the consequences of the climate crisis, it is clear these are not just economic benefits. It is also an economic imperative. I am so proud to see that urgency being demonstrated so clearly right here in Middlebury. I continue to be impressed by the Middlebury College commitment to leading by example in its investments in renewable energy and reducing carbon emissions”.

David Provost, Middlebury executive vice president for finance and administration, added that the solar project will allow the College to receive clean electricity from a new, locally generated source and that with this project, the College is further diversifying its energy mix as well.

Encore, the project developer, will complete the construction of the array in 2022. Located about two miles from campus on 30 acres of College-owned land off of South Street Extension, the project will include 29,000 panels mounted on single-axis trackers that will follow the sun east to west over the course of the day.

The agreement between Encore, GMP, and Middlebury will provide the College with local, cost-effective, renewable energy and allow Middlebury to retain and retire the renewable energy credits from the system. The innovative arrangement eliminates any cost shift to the utility's customers.

Initially, flocks of sheep, rather than noisy fossil fuel-powered mowers, will provide vegetation management at the site. Eventually, the site will feature pollinator-friendly plants and shrubs that will attract an increased number of bees, butterflies, and other insects that will help support crop production in the Middlebury area.

To fulfill the state requirements regarding grassland birds, the College will dedicate up to 95 acres of its land to be managed as a habitat for bobolinks and other grassland birds.

Once the solar array is constructed, it will produce about 50 times the energy required annually to power Forest Hall, a Middlebury College residence hall that houses 155 students. The project will provide a carbon-free energy source equivalent to the following:

The new solar project will join eight other Middlebury College solar arrays on and off-campus that comprise just over one megawatt.

The groundbreaking for the solar project follows the College's celebration in July of the start-up of the largest anaerobic digester in the Northeast at the Goodrich Farm in Salisbury. The digester, which creates renewable natural gas from cow manure and food waste, will supply about one-third of the energy that the College uses for heating and cooling. Along with using 100 percent renewable energy sources, Middlebury’s Energy 2028 plan calls for reducing energy usage by 25 percent, divesting Middlebury’s endowment of investments in fossil fuels, and educating and involving the entire campus community in its implementation.