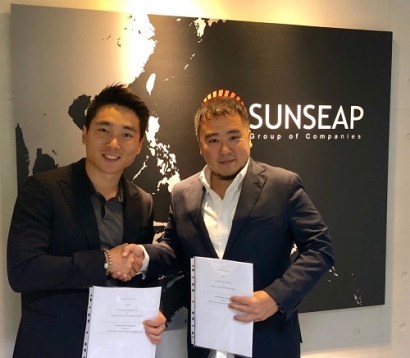 The news follows Sunseap’s recent announcements it will build a $150 million 168 MW solar farm in Ninh Thuan province on Vietnam’s south-central coast. Sunseap recently teamed up with one of China’s first private equity firms, Guohe Capital, and Shanghai’s renewable energy company Starkle Energy to expand into China, with a target to achieve over 200 MWp of solar projects over the next two years.

The joint venture company, Pacific Sunseap Energy Ltd, will focus on distributed photovoltaic projects in Taiwan, with plans to develop over 100 MWp of solar projects over the next three years.

Over the course of eight months, Sunseap’s foray into the Taiwanese market has gained some strong momentum. It recently provided engineering, procurement and construction (EPC) services for one of Taiwan's largest AC cable manufacturer to install a 2 MWp solar system on the rooftops of its new Taoyuan factory. Sunseap has also completed a 3.3 MWp canal-based solar system in Pingtung and has secured several projects in the manufacturing and agriculture sectors.

Frank Phuan, Co-Founder and CEO of Sunseap, said, “We are excited to partner with Pacific Green Energy Co., Ltd. to expand into the Taiwanese market and we hope to replicate the success we’ve achieved in Singapore and regionally, in the areas of rooftop and ground mounted solar solutions.

“Sunseap is always on the lookout for opportunities to collaborate with like-minded partners to develop innovative and viable renewable energy solutions such as the deployment of solar systems on alternative spaces such as canals, reservoirs and sea for the sustainable development of economies and communities in the Asia Pacific region.”

Sunseap is one of the largest players in the solar energy industry in the region. It has a pipeline of projects in Cambodia, Philippines, India, Thailand, Vietnam, Malaysia and Australia.