Tuesday, 12 November 2019
0
Robin Whitlock
A successful partnership between solar company Azuri Technologies and Marubeni Corporation has been awarded Best UK-Japan Partnership for 2019 at the British Business Awards, held in Tokyo on Friday, which showcased game-changing achievements of British and Japanese companies. 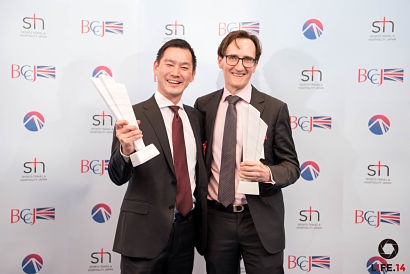 Azuri announced, in June this year, an investment of $26 million, led by Marubeni. The two companies are working together to implement a strategy to deliver affordable, clean energy solutions to millions across sub-Saharan Africa, a region in which over 600 million people still lack access to the grid.

“The energy market globally is in a period of rapid change and innovators such as Azuri are demonstrating how new technology can support or even replace conventional ways of delivering power” said Simon Bransfield-Garth, CEO of Azuri Technologies. The partnership between Azuri and Marubeni is an excellent example of how established businesses and fast-growing technology-based organisations can collaborate to accelerate growth. We are delighted to win this award.”

Yuji Sato, Marubeni General Manager, Power Business Division, added that while many energy businesses are focusing on delivering established technologies, Marubeni is exploring how new technology can provide a disruptive shift in the global energy market and that Azuri is at the forefront of this transition, providing a front seat view of these new markets as they develop.

The successful partnership is driven by a synergy between Azuri’s and Marubeni’s long-term vision for renewable energy and its role in providing life-changing, clean technology which is affordable to low-income rural households in Africa who currently are forced to spend a disproportionate amount of family income on harmful alternatives to light and power homes.

Since launching in 2012, Azuri has become one of the leading providers of life changing pay-as-you-go solar power lighting and TV systems, operating in Kenya, Tanzania, Uganda, Zambia and Nigeria.

The win in Tokyo is the latest recognition in a long list for Azuri including being named as the 42nd fastest growing technology business in the UK by The Sunday Times newspaper in September 2019. Azuri was also named in the CleanTech 100 and named in the FT1000 list of fastest-growing companies in Europe in 2019.