Thursday, 04 March 2021
0
REM
White Pine Renewables  has completed the Healdsburg Floating Solar Project. The project will deliver clean energy to the City of Healdsburg, Calif., under a 25-year power purchase agreement. At 4.78 MW(dc) and sited on ponds at the city's wastewater treatment plant, the project is the largest floating solar project completed in the United States to date. 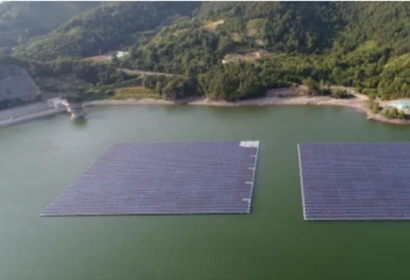 An example of floating solar provided by Noria Energy

The electricity generated by the project will cover approximately 8% of the city's total energy demand and is an important part of the city's plan to reach 60% renewable energy before 2030. Additionally, siting the solar panels on the ponds avoids using land for the project and will reduce evaporation and algae growth, benefitting the surrounding vineyards that rely on the treated water for irrigation.

The Healdsburg Floating Solar Project was developed and is operated by White Pine Renewables. "This project exemplifies what differentiates White Pine," said White Pine CEO Evan Riley. "We combined innovative technology and an efficient capital structure to provide long-term savings to the City of Healdsburg."

Noria Energy co-developed the project with White Pine and Collins Electrical Company,  a California-based construction contractor, provided installation services.  The Healdsburg project was completed in less than six months from procurement to commissioning.

Terry Crowley, Utility Director for the City of Healdsburg, described the project as "a cornerstone of the city's long-term plan to save money on energy costs and provide city electric customers with 60% renewable energy."  Crowley added that he "greatly appreciated the collaborative partnership between White Pine, Noria, and Collins Electrical to deliver the project safely, efficiently and in an extremely short period of time."

While still a small portion of the overall solar market, floating PV is becoming increasingly popular because of its dual land use purpose and generally higher energy production due to the cooling effects of water and wind.