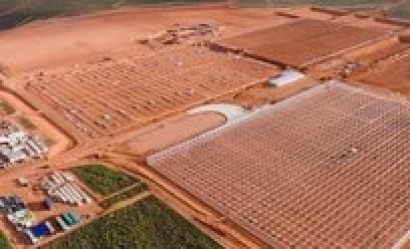 The project will aim to holistically satisfy the multiple energy needs of Sundrop Farms, supplying clean electricity to Sundrop’s greenhouses which are part of a ground-breaking new concept to grow high-value crops using seawater and sunlight as the main resources. Sundrop Farms began testing the integrated system on a small scale in 2010 and the positive results from the pilot encouraged the company to develop a large-scale application of the technology, expanding its operations to 200,000 square metres. The development will aim to grow over 15,000 tons of fresh vegetables annually for Australian consumers.

The first phase of the Integrated Energy System project will incorporate a 51,500 square metre solar field consisting of more than 23,000 heliostats, to be delivered by the California-based company eSolar. It will be the first large-scale CSP-based facility in the world to provide multiple energy streams (heating, fresh water and electricity) for horticultural activities, aiming to meet the development’s different energy needs at the lowest possible cost throughout the year. Aalborg CSP will be the turnkey supplier of the solar plant and power block which will be capable of heating the greenhouse in winter and on cold summer nights and providing fresh water by desalinating seawater drawn from the nearby Spencer Gulf. The plant will also periodically run a steam turbine to produce electricity.

“The Integrated Energy System is the first of its kind in the world and it changes the way we are thinking about energy today” said Svante Bundgaard, CEO of Aalborg CSP. “It is an intelligent way to supply different energy outputs at the time the industrial facility would need it while providing significant cost and CO2 savings as well.”

Once commissioned in the second half of 2016, the Integrated Energy System will provide a new platform to demonstrate technology capable of addressing major global energy challenges, offering a cost-competitive alternative to conventional energy technologies and displacing at least 14,700 tons of carbon dioxide annually, equivalent to 2,807 cars being taken off the roads in a year.