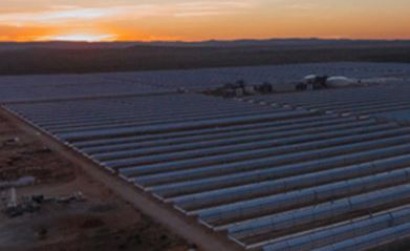 The plant, located in Northern Cape Province in South Africa, was upheld as a pioneering facility in the renewables sector for South African industry, in addition to making an important contribution to the social and economic development of local communities.

The Bokpoort CSP plant, which opened in March this year, was built by a joint venture of Spanish companies Acciona, Sener and TSK and South Africa’s Crowie. It was developed for ACWA Power, the Saudi group, as an EPC (Engineering, Procurement and Construction) project and required an investment of more than 300 million de euros.

The Bokpoort plant is the first in Africa equipped with molten salt tanks that provide thermal storage capacity of 9.3 hours. This means that Bokpoort can continue to produce electricity long after the sun has set. In its first month of commercial operation, the plant produced electricity continuously for 161 hours, or more than six days, setting a new record for this technology in Africa.

“One of the main challenges posed by solar thermal technology is whether it can generate electricity in the absence of the sun," said José Luis Valdivieso, Project Manager of Acciona Industrial.

"All efforts in our plants that use CSP (Concentrated Solar Power) technology are focused on the maximum production of energy, particularly at times of peak demand from the grid," Valdivieso continued. "Therefore, what has been achieved in Bokpoort has been a great success, not just for Acciona but for the solar thermal market in Africa in general. We are encouraged by the results, and hope to continue improving the performance of CSP plants in the near future.”

Acciona Industrial is now building a second CSP plant in South Africa at Kathu. With a capacity of 100 MW, it will also use CSP technology with thermal storage using molten salts.

“Our experience in Bokpoort has helped us improve our systems and processes. The technology has matured, our construction is more efficient and we are using innovative building techniques and composites in the performance of the collectors and salt storage tanks,” Valdivieso said.

Bokpoort is the fourth CSP plant built by Acciona outside Spain and, together with Kathu, consolidates the company’s presence in the renewables sector in South Africa. In late 2014 Acciona put the 94.3 MWp (74 MW nominal capacity) photovoltaic plant at Sishen into service, and in August 2015 the 138 MW Gouda wind farm came on stream. Both are owned by a joint venture in which Acciona Energía – the renewable energy division of Acciona – has a majority stockholding.