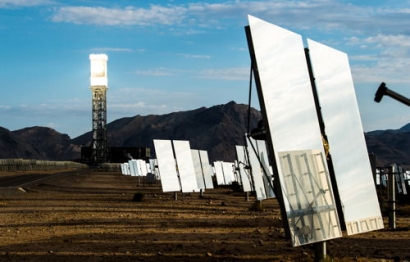 The study claims rising electricity demand coupled with increasing investments will foster the concentrated solar power market share. In July 2016, the U.S. government funded $9 million towards research and development of six CSP projects with an aim to reduce the overall project cost through technological advancements.

Declining component costs coupled with favorable government incentives including carbon credits and renewable energy certificates will lead to an upsurge in the global concentrated solar power market by 2025. Easy integration with the grid makes it the most cost-effective energy alternative for large scale power generation, according to the report.

The report predicts the U.S. concentrated solar power market share will see growth of over 8% by 2025. Federal government initiatives including tax rebates, financial assistance and net metering will complement the industry outlook.

Chile’s concentrated solar power market revenue is set to witness strong growth of over 25% over the forecast timeframe according to the research. Favorable climatic conditions with strong pipeline projects will boost the business. Also predicted is Morocco exceeding $5 billion by 2025.

China’s concentrated solar power market is predicted to exceed 7 GW by 2025. The government of China aims to install 110GW of solar power plants, of which 5GW will be accounted from CSP. Favorable initiatives including feed in tariffs and tax benefits may further boost the business.

Request for a sample of this research report @ https://www.gminsights.com/request-sample/detail/1164