Monday, 07 March 2011
0
Dan McCue
Florida Power & Light Company, based in Juno Beach, Florida in the US has launched what it says is the world’s first hybrid solar energy centre. 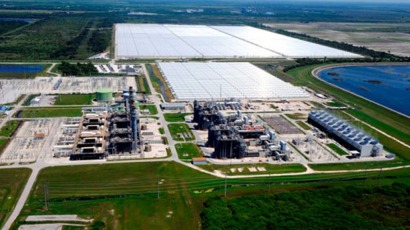 The 75 MW plant, called the FPL Martin Next Generation Solar Facility, sits on 500 acres in Western Martin County in Florida and has a field of over 190,000 solar thermal mirrors.

What makes the plant a hybrid is the fact the solar array farm has been combined with an existing combined-cycle natural gas plant.

"From job creation to cleaner air to energy security, this project demonstrates the many benefits of investing in large-scale renewable energy, especially in Florida," said FPL President and CEO Armando J. Olivera.

"We're hopeful that today's leaders will take action to enable more cost-effective investments like this so we can continue taking dramatic steps forward to reduce our dependence on fossil fuels and get more Floridians back to work quickly," Olivera said.

Martin County, Florida is known as a bastion of environmentalism in the sunshine state, and is located about halfway between the Cape Kennedy Space Centre and the City of West Palm Beach.

Its prominent residents include Nathaniel Reed, former US Undersecretary of the Interior, and Maggy Hurchalla, a former Martin County Commissioner, who sister is Janet Reno, who served as President Bill Clinton’s attorney general.

Among the issues Reed, Hurchalla and others have staked their reputation on are restoration of the Florida Everglades, Protection of Lake Okeechobee, and safeguarding the St. Lucie Estuary.

“Today we are creating Florida’s future as the clean energy state. By investing in emissions-free solar power, FPL is creating a brighter future and reducing the risk to our citizens from the environmental and economic risks of fossil fuels,” said Eric Draper, executive director of Audubon of Florida.

FPL said the solar array alone should produce enough electricity to power 11,000 homes. The utility said the solar production at the plant will reduce fossil fuel consumption by about 41 billion cubic feet of natural gas and to save more than 600,000 barrels of oil.

The reduction in burned fossil fuels will prevent the release of about 2.75 million tons of greenhouse gas and save the power customers $178 million in fuel costs over the 30-year life of the new plant.

FPL also announced today that it secured and permitted additional sites where more than 500 MW of new solar power can be constructed.

Among those who attended the opening of the facility this morning were Florida Governor Rick Scott, Florida Senate President Mike Haridopolos, and several local public officials, environmental experts and business leaders.