Wednesday, 23 November 2011
0
Toby Price
Spain’s Iberdrola Engineering is committed to Integrated Solar Combined Cycle technology, which comprises bolting on a solar field to a conventional gas-powered plant. It says that this approach is “gaining greater acceptance” and estimates the future of this type of hybrid power will require “a greater contribution of solar as the technology matures and associated investment costs fall”. 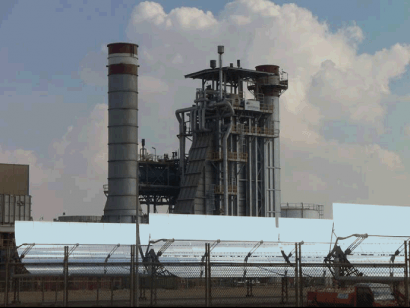 In July, Iberdrola Ingeniería y Construcción (Iberdrola Engineering) commissioned the ISCC Kuraymat plant, one of the first plants of its kind in the world which uses gas and solar energy to generate electricity more cleanly. The plant has an installed rated power output of 150 MWe and usable power output of 126 MWe, and the company estimates that by bolting on a solar field (consisting of parabolic collectors that use the sun’s rays to generate steam) it will save up to 5,000 tonnes of natural gas per annum and avoid 16,000 tonnes of carbon emissions each year. It describes the plant as "a benchmark for clean, low contaminating generation of electric power”.

But Juan Ignacio de la Fuente Rodriguez, Kuraymat’s Project Director, does not stop there. He says that the idea of adding solar power to traditional fuel plants is gaining greater acceptance, “because it is the option that offers the greatest advantages for obtaining high efficiency at still reasonable costs through solar heat input”.

The executive from the Spanish energy giant, Iberdrola’s engineering subsidiary, says Integrated Solar Combined Cycle (ISCC) solutions are particularly useful “as a transition from conventional generation to generation from renewable sources”, helping to compensate for the cost of part of the fossil fuel and significantly increasing the plant’s overall energy output performance.

“When the traditional models for generating conventional electric power become exhausted, fossil fuels become less and less competitive due to their scarcity or lack of quality. Adding solar power to improve output and increase the capacity of electric power generation plants is the best and least costly option, as it uses assets from existing or newly built plants, and the investment costs can be modulated based on the margin of exergetic [sic] contribution to be provided to the conventional cycle,” he says.

Juan Ignacio de la Fuente Rodriguez is clear: “ISCC plants are a clear example of technological innovation and efficient coexistence of conventional generation processes and solar renewable energy. They are not mutually exclusive, but rather complement each other efficiently”.

While the project manager highlights that ISCC plants do have a drawback – “solar loss” where the steam turbine operates with variable loads, sometines far from its maximum output – he says the advantage of being able to operate in “night mode” as a conventional gas combined cycle plant, and in “day mode” with “free” solar heat input, is compelling.

Currently, 27 states in the US for example have passed Renewable Portfolio Standards legislation that includes specific mandates requiring that a percentage of renewable energy needs be met by means of solar power. However, today the cost of many solar projects is not competitive compared to other power generation options. For this reason, hybrid generation has given rise to great expectations, with the possibility of making reasonable generation investment costs by 70% on solar energy compatible with high energy efficiency.

According to the Electrical Power Research Institute in the US, the use of solar power to improve the output of natural gas is potentially the least costly option as regards power generation. And because the highest intensity of solar power is usually reached during a few peak hours, during and usually in summer, the ISCC option becomes the most attractive and competitive renewable choice.

According to Iberdrola’s figures, a traditional combined cycle plant costs €1,098 thousand per MW to build, while a solar power plant comes in at a whopping €6,500 thousand per MW given the nascent state of solar thermal technologies. That said, de la Fuente Rodriguez points out that a hybrid plant such as Kuraymat can be rolled out for only €1,831 thousand per MW, representing a considerable cost saving.

The great advantage of this hybrid technology is also that a base load is generated permanently and independent of weather conditions and of the sun (net rated output power typically ranges from 103.8 MW (night) to 125.7 MW (day)). Costly energy accumulation is also not required, and solar heat input decreases carbon emissions by more than 20%.

“On paper, ISCC makes a lot of sense,” says de la Fuente Rodriguez.” The idea of adding solar power to conventional combined cycle plants is attractive and is gaining acceptance among investors.”

Iberdrola Ingeniería y Construcción is one of the world's largest power engineering companies with projects in more than 30 countries and subsidiaries and branch offices in 27 countries throughout Europe, Asia, Africa and North and South America. In 2010 the company's portfolio of projects surpassed €two billion. The company is also responsible for building Cerro de Hula in Honduras, the largest in Central America, in addition to other wind farms and solar PV arrays across the world. Earlier this month, for example, it announced it had begun building its first wind farms in France and the United States.