Thursday, 21 February 2019
0
REM
Lointek  has been selected for the turnkey supply of the integrated steam generation system and the oil-salt thermal storage system for DEWA IV, the world's biggest thermosolar power plant that will start operating in 2022, in Dubai, United Arab Emirates. 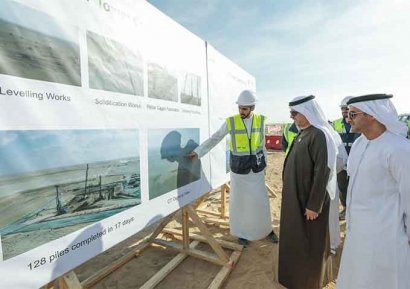 The firm, based in Biscay, Spain, is in charge of the engineering, manufacture, installation and launch of the power island. This will take place in three phases: the first of 18 months, and the following two in consecutive eight-month periods. These systems are considered to be critical elements in the plant’s development and of high thermomechanical complexity in their design and implementation.

The company has delivered around 1,000 heat exchangers in a decade, a figure ten times greater than the second company in the sector’s ranking. Lointek has supplied power systems to 55 thermosolar plants in ten countries across America, Europe, Africa and Asia, with a total renewable thermosolar electrical power generation capacity of 3,500 MW.

In 2018, LOINTEK also participated in thermosolar plants in South Africa and Morocco that were already fully operational and, currently, it is working on the testing phase of a plant in Israel and the installation of another in Kuwait.

The DEWA IV project entails an investment of $4 billion and breaks a number of records. In terms of its capacity, it has a total power of 950 MW, of which 600 are from parabolic trough generation (three times the maximum capacity of existing facilities), 250 MW from photovoltaic generation and 100 MW from the central tower system.

The solar park has a surface area of 3,750 hectares. In addition, the central tower is the tallest of all the solar plants built up to now, reaching a height of 260 metres.

DEWA IV (Dubai Electricity and Water Authority) is situated 50 km outside Dubai and forms part of the Dubai Clean Energy Strategy 2050, which sets a target for renewable energy of 7 percent of total energy production by 2020, 30 percent by 2030 and 75 percent by the middle of the century.