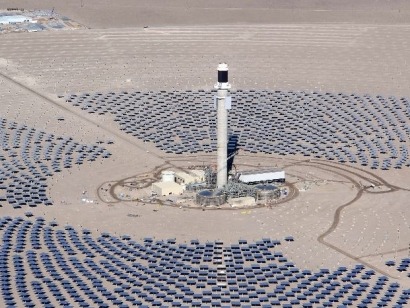 The Crescent Dunes Project is more than five times the capacity output of pilot projects that have previously tested this technology.

As a result of the advanced energy storage technology, the 110 MW project will generate more than 500,000 megawatt-hours per year, enough to power 75,000 homes during peak electricity periods. This annual output is more than twice that of other technologies per MW of capacity, such as photovoltaics (PV) or direct steam solar thermal.

The storage technology also eliminates the need for any backup fossil fuels, such as natural gas, which are needed with other technologies to keep the system going during  times of no or low solar resource. Nevada’s largest electric utility, NV Energy, will purchase 100 percent of the electricity generated, under a 25-year power purchase agreement.  Full commercial operation is scheduled for later in 2014.

“Start of commissioning of the Crescent Dunes solar power plant marks a critical milestone for the project as well as the solar industry. We are now able to build utility-scale power plants, fueled only by the sun, which operate on-demand, day and night, just like traditional fossil fuel or nuclear power plants,” said SolarReserve’s CEO Kevin Smith. “SolarReserve’s industry-leading solar thermal energy storage technology solves the intermittency issue that limits the use of other renewable energy projects and thus enables firm, reliable delivery of electricity whether or not the sun is shining or the wind is blowing.”

Commissioning is the initial stage of bringing the project into operations and includes system-by-system verification and startup, as well as equipment calibration and testing.   Commissioning activities underway at Crescent Dunes include energization of the utility interconnection system and other electrical systems, as well as the first stages of testing and calibration of the heliostat field.

This heliostat field is comprised of more than 10,000 “billboard-sized” mirrors that track the sun and total more than 1 million square meters of glass.  Full commissioning activities will also include startup of the demineralized water, air, steam, cooling and many other systems which are commonly found in traditional power plants.

However, unlike traditional power plants, commissioning includes systems unique to Crescent Dunes such as a Heliostat Field Control System that will control and concentrate the sun’s energy and also the Molten Salt System that will harness, store and transform the sun’s energy into superheated steam, making this the most advanced solar power plant in the world. The facility also includes a dry cooled condenser in a hybrid configuration to minimize water use to levels well below that of conventional power plants.

The Crescent Dunes plant is the showcase for SolarReserve’s energy storage technology — a realistic solar energy solution that operates day and night like coal, natural gas, oil, diesel and nuclear plants, but without the harmful emissions or hazardous wastes associated those traditional plants.

Additionally, Crescent Dunes includes the capability to dry cool the steam cycle, an environmentally friendly low water use feature that will saves millions of gallons of water each year. Once operational, the 110 MW Crescent Dunes plant will be the world's largest solar thermal plant with fully integrated energy storage.