SES received the award for its SunCatcher technology advancements that led to its commercialization in 2009. These included the establishment of a global supply chain with the engineering skills, manufacturing capabilities and production capacity required to mass produce SunCatche units; an optimized design for high volume production resulting in increased performance; and the successful completion, operation, and commissioning of Maricopa Solar, the world’s first commercial‐scale SunCatcher Dish Stirling project.

The commercialization of the SunCatcher technology is in large part thanks to the significant investments provided over the last few years from the US Department of Energy and the engineering and design achievements achieved by SES in collaboration with Sandia National Laboratories in New Mexico. NTR’s investment in SES in 2008 enabled the company to escalate plans to launch the technology and led to the creation of Tessera Solar in 2009 to actively pursue and develop projects for the SunCatcher.

The construction and operation of the 1.5 MW Maricopa Solar commercial-scale power plant in Arizona is a testament to the scalable nature of the technology. Comprised of 60 SunCatcher units, the plant represents a building block for larger planned projects to be deployed in the next year. Successful development of the Maricopa Solar project has enabled SES to effectively exercise its manufacturing supply chain, optimize field assembly and installation procedures, and integrate SunCatcher™ units with the electricity grid. Since beginning operations earlier this year, Maricopa Solar is delivering over 97 percent cumulative availability.

The SES SunCatcher™ is a 25kW solar power system consisting of a dish‐concentrator that tracks and focuses solar energy onto a Power Conversion Unit, which utilizes a Stirling engine to convert solar energy into grid‐quality electricity. SunCatcher™ has several unique and differentiating attributes including zero water use for power production, a modular and scalable system architecture, and terrain flexibility up to 10 percent. 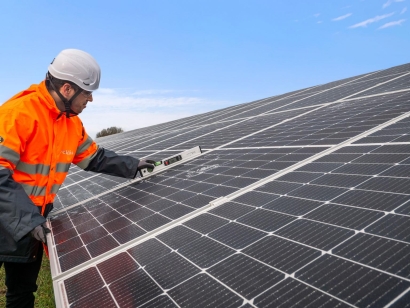