Thursday, 07 July 2011
0
REM
Even the recent social uprising in Egypt has not stopped Iberdrola from pushing forward with its plans to commission the 150-MW Kuraymat power plant due south of Cairo, which fuses solar energy with a combined cycle gas plant, thus saving fuel and increasing the plant’s overall output. The Integrated Solar Combined Cycle (ISCC) facility was opened this month. 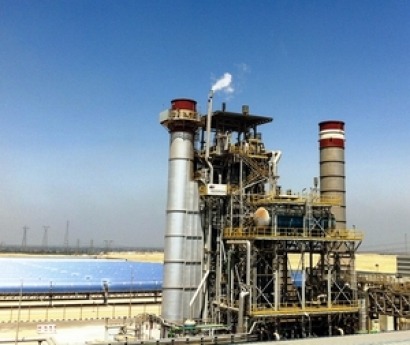 Iberdrola Engineering has just started up the Kuraymat power plant in Egypt, with a total capacity of 150 megawatts (MW). This facility is one of the first of its kind in the world, in that it incorporates technology that combines the use of gas and solar energy, thus helping to reduce carbon dioxide emissions and improve the plant’s overall output.

The electricity generating plant, located 95 kilometres south of Cairo, will supply enough power for 200,000 people while saving around 16,000 tonnes of carbon dioxide emissions into the atmosphere each year. In addition, the use of solar energy in the overall power production process at the Kuraymat plant, on which around 1,000 people have worked over the last three years, will result in a saving of 5,000 tonnes of natural gas every year.

The Egyptian government, working through the New Renewable Energy Authority (NREA) awarded the company the “turnkey” contract to build this hybrid combined cycle plant, worth €150 million, back in September 2007, following an international public tendering process.

The Egyptian plant has been built in a flat and almost uninhabited area in the middle of the desert, very close to the River Nile. The area is equipped with gas pipelines and other necessary network infrastructure, and has therefore become a strategically important region for the generation and distribution of electricity in Egypt. The plan is for the area to become a test bed for the future mass exploitation of abundant solar resources, not just in Egypt but throughout the countries of the Middle East and North Africa.

The ISCC-type facility built by Iberdrola Engineering is designed to work in two different operational modes, in order to increase efficiency: during the night it operates as a conventional natural gas combined cycle plant, while during the day it operates a normal cycle but with the added energy provided by the sun.

On one side, the Kuraymat plant is fitted with a General Electric model 6FA gas turbine and a Siemens model SST900 steam turbine, while on the other it has a solar field covering 130,800 m2, with 160 parabolic cylinder collectors and 1,900 square metres of mirrors.

Kuraymat is the first solar thermal electric facility in Egypt. Back in December, the first ISCC plant in the world, built by Abener in Ain Beni Mathar (Morocco), began operating at full capacity.