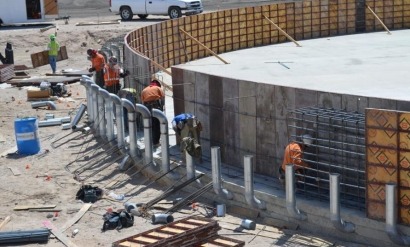 The Rice Solar Energy Project will be the first large-scale solar project in the state to include energy storage capabilities.

Located in eastern Riverside County, the Rice Solar Energy Project represents in excess of $750 million of direct investment in California and is expected to generate more than 5,300 direct, indirect and induced jobs across the supply chain in some of the state’s hardest hit economies over the 24-month construction period.

The project has received full environmental permits, including its California Energy Commission (CEC) license and National Environmental Policy Act (NEPA) approvals, and will be located on privately owned and previously disturbed land in the Sonoran Desert. The project will utilize a dry-cooled system to significantly minimize water usage in the desert location resulting in less than 20 percent of the water used per kilowatt of electricity produced by conventional coal or nuclear facilities. Financing activities are underway, and the project is expected to break ground in early of 2014 with commercial operation scheduled for mid-2016.

Before voting to support the amended power contract with PG&E, several CPUC Commissioners said they were particularly impressed with SolarReserve's incorporation of energy storage into the project was key to their support of the facility's development.

“The CPUC made it very clear that our ability to store energy was the key factor in approving the amended Rice contract,” said SolarReserve CEO Kevin Smith.

“SolarReserve’s market leading technology is a true alternative to conventional generators and can provide firm and reliable electricity as needed by the utility or system operator, day and night." he continued. "This capability will be crucial as California progresses towards its 33 percent renewable target. We are also making tremendous strides in exporting this proven U.S. technology worldwide to markets in Europe, Asia, the Middle East, Africa and Latin America, and our projects in Nevada and California help establish the U.S. as an innovation leader in alternate energy.”

SolarReserve secured a 25-year power purchase agreement for the Rice Solar Energy Project with PG&E in December of 2009. The contract was amended in late 2011 to accommodate a modification in the transmission connection of the plant and a revised commercial operations date.