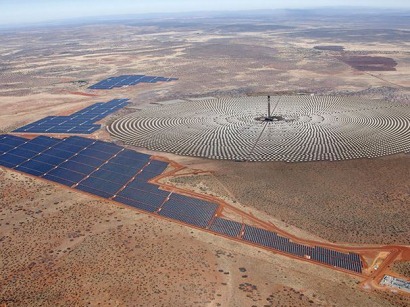 The Redstone project is a 100 MW clean energy facility that will be connected to the South African national grid. Using SolarReserve’s cutting-edge CSP technology, Redstone’s molten salt storage capability will deliver consistent baseload electricity, even after the sun sets. This is a critical development in a country where frequent power outages have been cited as an obstacle to economic growth.

OPIC support to the Redstone project is also a significant milestone for President Barack Obama’s Power Africa initiative, of which OPIC is a key contributor. Power Africa aims to bring new power access to the more than 600 million sub-Saharan Africans currently living without energy access.

“The development of the Redstone project will benefit the South African people, the international clean energy sector, and the role of U.S. leadership in emerging market development,” said Elizabeth Littlefield, OPIC’s President and CEO. “It’s impressive that Redstone brings together the innovative U.S. private sector leadership and technology of SolarReserve, the international experience of ACWA, and large-scale catalytic financing from OPIC. This sort of change-making partnership is at the heart of President Obama’s Power Africa initiative and creates broad, lasting impact in international development.”

“The Redstone project marks an important technology advancement for Africa in clean, renewable power, and a demonstration of U.S. developed technology that is leading the world in large scale solar energy storage,” said SolarReserve’s CEO Kevin Smith. “In addition, the project’s delivered electricity price is the lowest of any CSP project in the country to date,” Smith added. “We appreciate OPIC’s support and look forward to working with our partner ACWA Power and the communities where the project is located to help South Africa at a time when it critically needs new generation to support growth of its economy.”

“The Redstone CSP Project, ACWA Power’s 2nd project in South Africa, delivers dispatchable power at the most competitive tariff offered in its Renewable Energy Independent Power Producer Procurement Programme program to date for CSP technology, while maximizing value retention in not only  the South African economy, but also within the local economy in the project vicinity," said Paddy Padmanathan, President and CEO of ACWA Power.

"Quite apart from the socio-economic contribution this project will make to South Africa, the first time deployment of CSP Tower technology in the country using a project finance framework, which was made possible by the galvanizing leadership of OPIC financing, will enable this very important clean energy technology to be deployed at scale and at a faster pace than otherwise would have been possible,” Padmanathan said.