US Dept. of Energy finalizes more than $1 billion in loan guarantees for solar projects

Thursday, 29 September 2011
0
Dan McCue
Against a backdrop of the still-simmering controversy over the Solyndra bankruptcy and apparent loss of more than $500 million in taxpayer-backed loan guarantees, the US Department of Energy has approved over $1 billion in loan guarantees to a pair of solar facilities in the American west. 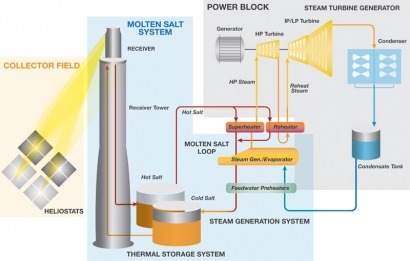 An additional $337 million loan guarantee was granted to Mesquite Solar 1, LLC to support the development of an innovative photovoltaic solar generating project in the US state of Arizona.

“If we want to be a player in the global clean energy race, we must continue to invest in innovative technologies that enable commercial-scale deployment of clean, renewable power like solar,” Chu said. “Solar generation facilities, like the Crescent Dunes Solar Energy Project help supply energy to local utilities and create hundreds of good, American clean energy jobs.”

“The same is true of support for innovative technologies [like those being used in the Arizona project], which will ultimately help bring down the cost of renewable energy,” he said.

It will be the first of its kind in the United States and the tallest molten salt tower in the world. Located 14 miles northwest of Tonopah, Nevada on land leased from the Bureau of Land Management, the company expects the facility to produce enough electricity to power over 43,000 homes and avoid the release of nearly 290,000 metric tons of carbon dioxide annually.

Sempra Energy, the project sponsor, said the Mesquite Solar 1 Project will be one of the first utility-scale PV power plants in the country to use U.S.-manufactured, innovative transformer-less and liquid cooled inverter technology.

The technology allows for significant improvements in energy output, a decrease in operating costs and improved reliability. The facility will avoid the emissions of over 200,000 metric tons of carbon dioxide annually. The project is anticipated to generate nearly 350,000 megawatt hours of electricity in the first full year of production, or enough to power nearly 31,000 homes.

The generation project is supported by a power purchase agreement to sell power to the Pacific Gas & Electric Company.

A requirement that power purchase agreements be in place is one, very big reason why loan guarantees to generating projects are seen as far safer bets than loans to manufacturers of innovative technologies, as was the case with Solyndra.

Ted Michaels, President of the Energy Recovery Council, which advocates for waste-to-energy projects in the US, said in general, loan guarantee programs in the US have worked exactly as it is supposed to work.

By that he meant that, in theory, the program wasn’t supposed to “cost’ the taxpayers money.

The problem with the Solyndra loan was that the company was dedicated to an innovative technology and was subject to market forces beyond its control, like the sudden and very steep drop in the price of silicon.

“The way the program was set up was that the government would only have to pay for failure, and unfortunately for it, Solyndra failed,” Michaels said.

“Much better are programs like the federal renewable energy production tax credit, which only pays for production… in other words, success,” he said. “If you don’t generate electricity, you don’t get any money.”

No one expects a replacement for Title XVII Section 1705 to be proposed any time soon, but that has nothing to do with the controversy swirling around the Solyndra bankruptcy, observers said.

Michaels and others said the program was always expected to expire and that it has simply run its course.

Whether additional funding support for renewables, whether through grants or loans, can pass muster given the current political climate in Washington, is another question.

“Given the constrained budget environment we’re witnessing, I would say there aren’t many people walking around Washington with a lot of optimism that tax credits of any stripe are going to have much of a future,” Michaels said.

Matthew Feinstein, an industry analyst with Lux Research, said the reality is funding for renewables, and particularly solar, was drying up before the collapse of Solyndra.

“And by that I mean, across the board, both in the US and abroad,” he said in an email. “The same talk of budget cutting that is now so prevalent in the US manifested itself in Europe much earlier, the governments concluding they just couldn’t afford to sustain the industry as they had in the past.

“Manufacturers are the ones who feel the effects, in particular, as they don’t want manufacturing capacity to go unsold. This uncertainty has led to oversupply in the market,” Feinstein said.

Asked to pick a winner or loser, between PV and CSP in such an environment, Feinstein at first demurred.

“CSP was never really a direct competitor with photovoltaics, particularly for hot water generation – that’s apples and oranges,” he said.

However, when it comes to electricity generation, Feinstein said, “high initial costs – no matter how economical production is at large scale – will hinder adoption, as financing becomes more and more scarce. I think conventional PV, where system economics are more favorable at small or large scale – coupled with its bankability – will win out.”