Why solar chimneys could be the way forward

Friday, 17 February 2012
0
REM
With the on-going decrease of fossil fuel resources and increasing worldwide pollution, there is a growing need for more environmentally friendly renewable energy sources. Johannes Pretorius, inventor of the solar chimney design software, says it is vital that the utilization of this energy source be economically viable, especially for its possible use in Third World countries. He reports that engineers and scientists are increasingly looking to solar chimneys as a potential answer to this problem. 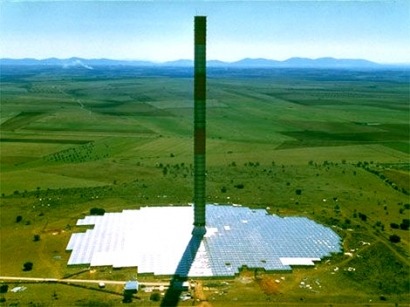 “Man has already tried to harness energy from the sun in various ways. These include parabolic trough solar power plants, central receiver power plants, dish-stirling systems, solar pond power plants and photovoltaic power plants. Since the 1970’s, the development of solar chimney power plants have also been investigated and have since become a good prospect for large scale energy generation," explains Johannes Pretorius, an inventor working with the Stellenbosch University in South Africa.

A solar chimney power plant consists of a circular transparent collector raised a certain height from the ground, with a chimney at the collector centre. A single turbine or multiple turbines are located at or near the base of the chimney and are connected to an electric generator or generators. Radiation from the sun penetrates the collector and strikes the ground surface beneath, which is heated and in turn heats the adjacent air, causing it to rise. The warm rising air is trapped underneath the collector, but rises up into the central chimney, causing the air under the collector to be channelled into the chimney as well. The air ﬂowing into the chimney drives the turbine or turbines which subsequently generates electricity.

A prototype solar chimney power plant was built in Manzanares (Spain) in 1982 in a joint venture between the German structural engineering ﬁin Schlaich Bergermann and the Spanish government. The plant had a collector diameter of 244 m and a 194. 6 m high, 10 m diameter chimney and was designed to produce 50 kW. “The pilot plant operated successfully on an experimental basis for seven years, proving that the concept is technically sound,” says Johannes Pretorius.

Since the pilot plant’s introduction, various studies have been conducted, investigating the possibility of building large-scale solar chimney power plants. According to these studies, such plants will have collector diameters in the range of 4000 m to 7000 m, chimney heights of 1000 m to 1500 m with a chimney diameter in the order of 160 m and should generate a peak power of between 85 MW and 275 MW, depending on the size of the plant. The most noteworthy commitment towards constructing such a plant on a large-scale is a current joint venture between an Australian based company, EnviroMission Ltd. and other firms including the German ﬁrm, Schlaich Bergermann und Partner.

Why use solar chimney technology?

•  Solar chimney power plants utilize beam and diﬀuse solar radiation. Therefore, although reduced, the plant still generates power under cloudy conditions.
•  The ground (soil) underneath the collector of a solar chimney power plant acts as a natural energy storage mechanism, which allows the plant to generate power at night.
•  Construction  materials  that are used (mainly  glass and concrete)  for  such a plant  are relatively inexpensive and readily available.
•  The plant operates using simple technology. Except for possibly the turbo-generator, the technology of a solar chimney power plant will not become out-dated easily.
•  The plant does not require any non-renewable fuels in order to operate and does not produce any emissions. This also means that the plant would never have to deal with escalating fuel costs.
•  At suitable plant sites such as desert areas, solar radiation is a very reliable input energy source. Consequently, energy produced by solar chimney power plants will not produce power spikes which may occur with schemes such as wind energy generation.
•  The plant has a long operating life (at least 80 to 100 years).
•  Solar chimney power plants do not require any cooling water making them ideal for use in water resource poor areas.
•  Low maintenance cost.

The software modelling tool can be accessed by anyone intending to design and build solar chimney power plants by contacting Saberi Marais, business developer at InnovUS, Stellenbosch University’s technology transfer office. A consultation service is available to anyone interested in applying the software.

[Editor's note: This article is an edited version of an article provided by Saberi Marais, business developer at InnovUS.]