Tuesday, 12 November 2019
0
REM
Norwegian company, Kvarøy, a third-generation family-run enterprise, has taken it upon itself to run its fish farm sustainably. A major factor in implementing this policy was reducing the high rates of diesel consumption for operating the fish farm and the feeding systems. Two large diesel generators and one small one are in operation on the anchored concrete platforms. At least one of them must always be running since there is no power connection onboard. At the same time, the electricity demand fluctuates greatly within the course of a day. 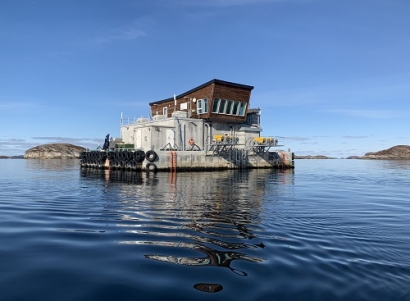 Due to long operating periods and poor diesel combustion in the generators, each kilowatt hour of electricity brought with it considerable costs. Additionally, a large portion of the diesel was only used to keep the engine warm while a small portion actually drove the system. On top of that, the fuel has to be transported by boat to the salmon farm, which of course means additional energy and incurred costs.

Kvarøy now uses a large-scale storage system developed by Tesvolt at its salmon farm which is located off the island of Selsøyvær in the Norwegian Sea. Mounted on a floating platform, lithium batteries with a total storage capacity of 158 kWh have brought the diesel generators’ operating time down from 24 hours each day to just three. In raising a generation of salmon — a process which takes about 18 months — the company saves between €150,000 and €200,000 and also reduces its carbon footprint.

With its 120 kW peak power capacity, the battery system can be monitored and controlled from land over the internet. Power electronics from Siemens control all energy flows on the working platform fully autonomously and deliver electricity to all consuming elements. A diesel generator creates electricity for the batteries at full capacity operation and the electrical energy consumers are supplied by the batteries with the necessary electricity. The generator is not switched on and the batteries are not recharged until the state of charge is low. The battery system allows for a reduction in the fish farm’s total diesel consumption of up to 60 percent.

“Tesvolt battery storage systems are the only ones on the market that can be fully charged and discharged twice in one day and still maintain their long service life,” Jonas A. Kverneland, Technical Director of Kverneland Energi, reports on his market research. “Many suppliers only enable one storage system charge and discharge cycle per day, which wouldn’t have worked for the salmon farm.”

“The starkly decreased consumption of diesel contributes to climate conservation and keeps water pollution as low as possible,” Kverneland says — a key concern of the Norwegian government.

Since the diesel generators are only rarely in operation now, noise levels and vibration effects are lowered and the fish farm produces fewer emissions.