Monday, 08 February 2021
0
Robin Whitlock
A new long-life source of underground hydro-powered energy storage has been invented by British company RheEnergise which is now embarking on its first successful crowdfunding project to fund the next phase of the project. 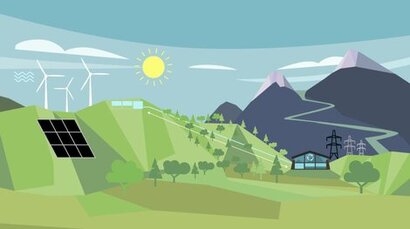 The low-cost, energy efficient and environmentally-benign energy storage solution High-Density Hydro could mean thousands of hillsides across the UK being used to provide energy to the UK’s energy system.

RheEnergise is aiming to have its first commercial system operating in 2024 and over 100 systems within the next decade.

The crowdfunding campaign has secured more than £320,000 two weeks since opening to the public.

The company has taken one of the oldest forms of energy storage - pumped-hydro (reservoirs, dams) - and developed an innovative solution - High-Density Hydro.   Rather than using water, RheEnergise has invented a fluid, which is 2½ times denser than water, and which can provide 2½ times the power and 2½ times the energy when compared to a conventional low-density hydro-power system that operate in the Scottish Highlands, Wales and across Europe.

It means that, unlike conventional pumped hydro energy storage, a RheEnergise HD Hydro system can operate beneath small hills rather than mountains; the system requires 2½ times less vertical elevation. It therefore means that there are many more sites suitable for RheEnergise projects – in the UK and across the world.

RheEnergise’s own analysis shows that there are around 9,500 UK site opportunities, around 80,000 in Europe and around 160,000 in Africa, so there is a massive opportunity to give pumped storage a new lease of life, create a new industry in the UK (and new jobs) and export UK know-how overseas.

It is acknowledged that far more energy storage will be required in the future to support the UK energy system and globally.  In the UK, Aurora Energy Research forecasts an additional 13 GW storage requirement by 2030 (it’s currently 3.8 GW).  Whilst Bloomberg New Energy Finance predicts that the global energy storage market needs to grow 100 times its current size and will be worth in excess of $620 billion by 2040.

The HD Hydro system will be faster to build and easier to maintain, and therefore lower cost.  Each system would require planning consent and will have an operational life of more than 60 years, so a more cost-effective alternative to battery storage.

RheEnergise’s R&D work to date has been part-funded by Innovate UK, an arm of the UK Government (eight grants totalling £550,000 to December 2020 and a further on-going grant of £135,000). Its work is also supported by a number of academic and research organisations, including Exeter University, Camborne School of Mines, the Science & Technology Facilities Council, the National Engineering Laboratory and Eminox, a specialist engineering company based in Gainsborough, Lincolnshire.

The company’s crowdfunding campaign, through the Crowdcube platform, will help to finance the building of a 500kW test rig, which is likely to be located at Cumbernauld, in Scotland’s Central Belt.  Given the positive response to the crowdfund campaign, RheEnergise will be keeping open the Crowdcube platform to allow people more time to invest in the company’s technology and leading towards the demonstrator project.

“We offer a neat, low-cost, zero-carbon and scalable solution to meet the energy storage needs of this country and across the world” said Stephen Crosher, Chief Executive of RheEnergise.  “Energy storage, like our HD Hydro system, will enable the increased deployment of wind and solar generation to achieve the energy transition; renewables, being intermittent, requires flexible, efficient and low-cost storage solutions.  Our HD Hydro system offers exactly that. We all know that HD TV is much better than conventional TV, it’s the same with HD Hydro, much better, in fact 2½ times better. Flexible technologies like HD Hydro will form part of the UK’s smart electricity grid, supporting the integration of more low-carbon power, heat and transport technologies, which BEIS estimates could save the UK energy system up to £40billion by 2050. Whilst our underground, hillside technology opens up a massive amount of opportunity, we acknowledge the need for careful planning and stringent environmental assessments. Not every hillside location will be suitable.”