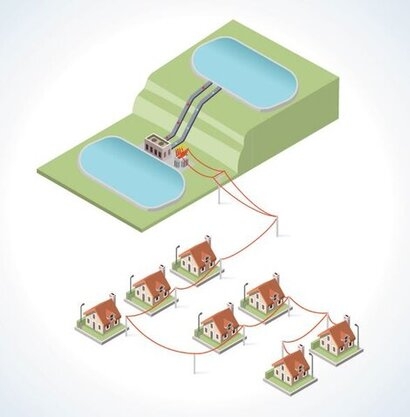 Rye Development currently has a pipeline of over 25 projects in 10 states. The Lewis Ridge pumped storage project is located adjacent to the Cumberland River near the communities of Blackmont, Tejay, Balkan and Callaway, Kentucky, and sits on a former coal strip mine in an active coal mining area. As coal is phased out of the grid across the nation, coal communities face uncertain employment and economic futures. Projects like Lewis Ridge create new jobs and economic activity in energy communities.

The project will invest nearly $1 billion dollars into the county and bring close to 2,000 family wage construction jobs over a 3 to 5-year period, as well as several dozen direct and indirect family-wage jobs during project operations. When fully FERC permitted, the project would receive a 50-year license to operate.

“Rye is proud to bring these types of developments to coal communities in the US - delivering on the promise of jobs in the energy transition” said Paul Jacob, CEO of Rye. “The Lewis Ridge project marks a significant step forward in the push toward a more renewable energy grid.”

The loss of coal generation also means the country will need thousands of megawatts of new generating resources and electricity storage to integrate the intermittent renewable energy from wind and solar that is being added to the grid. Long duration electricity storage, particularly pumped storage hydro, will help solve the challenge of how to take the wind and solar energy which is generated when the wind blows and the sun shines and transform that into energy that can keep the lights on around the clock.

The existing project site is unique and features beneficial topography and proximity to transmission infrastructure. These features allow Lewis Ridge to bring a significant amount of economic development benefit to adjacent communities while also preserving ratepayer reliability and affordability. Pumped storage facilities are the most common form of energy storage in the US, representing 95 percent of all utility scale storage, according to the US Department of Energy (DoE). It is a proven, available technology that can help reduce greenhouse gas emissions and dependence on fossil fuels.