Wednesday, 20 July 2011
0
Toby Price
Hamburg formed the backdrop recently for an announcement by German power giant, E.ON, which plans to feed heat from renewable energy sources into the public district heating grid. The Hanse Wärme Project aims to capture heat produced by renewable energy systems in the summer and store it for use in winter. 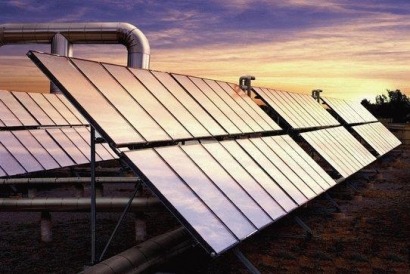 Under the new project being developed by E.ON, home owners who produce heat with the aid of solar-thermal systems will be able to feed it into the E.ON Hanse Wärme grid. A customer feeding in heat continues to own it, meaning that he can feed in heat in the summer and then withdraw it again in colder months. This enables home owners to dispense with the need for buying their own storage units for their solar-thermal systems as well as the complex control devices required.

"The combination of point-of-use production and central storage will be an essential element of tomorrow’s energy supply. With this project E.ON is showing that it is already possible not only to feed renewable power into the grid but also heat," said Dr. Dierk Paskert, member of the E.ON Energie Board of Management and Chairman of the E.ON Hanse Supervisory Board.

The Federal Ministry of the Environment is contributing to the funding of this project, which costs seven million euros. The existing heat storage system of a housing estate in the Hamburg district of Bramfeld has a capacity of 4,000 m³. For the purposes of this pilot project it has been converted into a multi-function storage system and integrated into the E.ON district heating grid. E.ON is breaking new ground by feeding solar heat into a district heating grid on this scale.

When it was set up almost 15 years ago, the solar storage system was already the first of its kind in Germany. It has been given a stainless-steel lining and 20 cm thick heat insulation. With its capacity of 4,000 m³ it is unmatched worldwide. Integrating the storage facility into the district heating grid makes it possible to store not only solar heat from the estate but also heat produced in other distributed generation units. The multi-function storage system is connected to E.ON’s district heating grid in the eastern part of Hamburg. E.ON uses this grid to supply up to 400,000 MWh of heat to its customers every year.

In other news this month, E.ON Hanse Wärme has announced that it intends to install over 360 packaged cogeneration systems in Hamburg, Schleswig-Holstein and Mecklenburg-Vorpommern by 2020. The E.ON subsidiary will invest about € 23 million in disseminating this efficient, climate-friendly technology over the next ten years.

The company explains that the systems are particularly efficient because they produce heat and power at the same time. Thanks to this cogeneration they also have significantly lower carbon dioxide emissions than separate heat and power production. The systems are designed so that they meet basic heat and hot water needs on the spot. The electricity simultaneously generated can also be used there or is fed into the public grid.

"Decentralised energy production will play a substantial part in the transformation of energy supply in Germany" – this is the conviction of Dr. Ingo Luge, CEO of E.ON Energie AG. "If it proves possible to centrally coordinate the output of distributed units, the packaged cogeneration systems can help to offset the fluctuations in power from renewable energy sources." Remote activation of some cogeneration systems via a data link is already possible. Most of the packaged cogeneration systems are smaller units with an electrical capacity between 5 and 50 kW. With special soundproofing they are particularly suitable for use in multi-family buildings. All units together can produce about 70,000 MWh of electricity per annum. This is sufficient for supplying roughly 20,000 homes.

For over 20 years E.ON Hanse Wärme GmbH has been successfully operating packaged cogeneration systems of various ratings. More than 160 E.ON systems are already in service in Schleswig-Holstein, Hamburg, Mecklenburg-Vorpommern and northern Lower Saxony. Biogas is increasingly being used as fuel. E.ON Hanse Wärme’s packaged cogeneration systems together generate over 250 million kWh of electricity annually. This is enough for more than 70,000 homes and also reduces annual carbon dioxide emissions by roughly 60,000 tonnes.