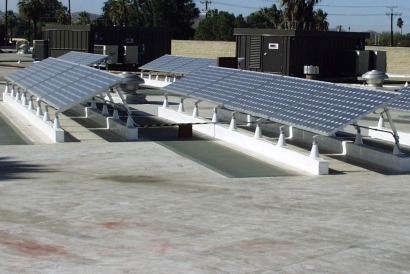 A member of the International District Energy Association (IDEA), Johnson Controls Inc, has introduced a solar cooling solution that features a solar-collector system developed by Cogenra, also a member of IDEA. The system uses the YORK Absorption Chiller and features PV waste-heat recovery technology which converts 75 percent of the sun’s rays into energy, compared to around 15 percent efficiency in a conventional PV system. The system also qualifies for state and utility incentives across North America, particularly in warm climates where cooling systems place a significant stress on the power grid, which in turn drives up electricity bills.

“IDEA is pleased to see technology and business collaboration among our member companies who are seeking to achieve scale in optimizing clean energy solutions like solar coupled with air conditioning” said IDEA President Rob Thornton. “I can see this technology offering substantial savings and environmental benefits in warm climates where electricity grid constraints drive high costs like the Middle East and Australia. A renewable cooling solution can provide a dual benefit to utilities and end-use customers alike.”

The solar-cooling solution can be integrated into any building controls system and generates hot water for the absorption chiller to air condition buildings as well as electricity to reduce demand from the grid. The solar collector system was developed by Cogenra, a leading developer of solar cogeneration technology based in Mountain View, California.

“Our customers deserve heating and cooling solutions that push the limits of technology design to reduce utility costs and maximize investments” said Joe Brillhart, director of global industrial chillers at Johnson Controls and Chair of the IDEA Board of Directors. “When you consider warm environments like Arizona or California, this solution is the financially responsible way to capture energy from the sun while leveraging one of the best absorption chillers on the market.”

IDEA is an independent, non-profit industry association formed in 1909 and based in Westborough, Massachusetts. It represents the interests of approximately 2,000 members from 25 countries involved in the operation, design, construction and optimization of district heating, district cooling and CHP (cogeneration) systems. A majority of IDEA members are based in North America, but it also has members in Europe, the Middle East and the Asia Pacific region.