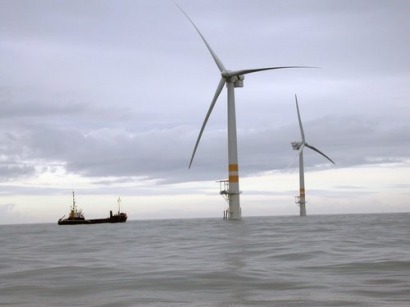 The 288 MW wind farm is located in the North Sea.

When it's completed in 2013, Meerwind’s 80 Siemens turbines will supply electricity to about 400,000 households, while eliminating a million tons of carbon emissions each year.

The project is the first to close under Germany's revised feed-in tariff laws. The renewed incentives are designed to help replace the roughly 25,000 megawatts (MW) of energy Germany will need to retire its entire fleet of nuclear plants by 2022.

Estimates suggest more than 2,000 wind jobs will be created in various German locations to manufacture the 100,000 tons of equipment needed for the wind farm. About 80 people will be needed to maintain the wind farm once it is operational.

But Blackstone didn’t stop there. The firm also announced that it acquired a permit to build another large wind farm in the North Sea, this one called Nördlicher Grund.

The 64-turbine wind farm with an estimated construction cost of €1.3 billion ($1.9 billion) will be situated approximately 100 km off the German coast in the North Sea.

Construction is expected to commence in 2013, with completion in 2016.