Friday, 22 April 2022
0
Robin Whitlock
ECOncrete is a new bio-enhancing material that encourages local organisms to settle on the surface of marine infrastructure such as ports, docks, underwater cable protection and wind turbines, while also reinforcing and protecting them. When using environmentally friendly materials, the construction sector can help reduce the environmental impact of offshore wind turbine infrastructures. 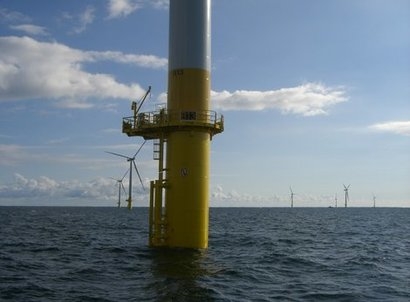 The decarbonisation of the economy is one of the keys to reducing the effects of climate change. In Spain, through the Climate Change and Energy Transition Law, progress is being made in this area by various sectors working together, with the energy sector being particularly relevant.

According to Jorge Gutiérrez, ECOncrete’s Global Head of Engineering, offshore wind is clearly emerging as a real and cleaner alternative to fossil fuels.

“Its potential is even greater in Spain, due not only to its thousands of kilometres of coastline, but also to the strategic geographic characteristics of the Canary and Balearic Islands” Mr Gutiérrez said. “It is necessary to enhance the ecological value of the base of the wind turbine itself or its anchoring system in the case of the floating ones. This is how the construction sector, with the use of ecological materials, like ECOncrete, can achieve both structural and ecological goals when designing offshore wind turbines infrastructures.

ECOncrete is developing a bio-enhancing concrete technology that promotes biodiversity which increases structural performance compared to traditional concrete. This is possible because of its composition, and science-based complex surface textures and a design that imitates nature. This ecological concrete material can also be applied in ports, docks, underwater cable protection, floating wind turbine bases, etc.; reinforcing and protecting them.

ECOncrete results are already evident in more than 40 locations and 10 countries: the coastal protection units deployed at the port of San Diego in the United States areis covered by a biodiverse ecosystem, which is even home to predators such as lobsters and octopuses. Crabs can also be seen in the coastal protections of Brooklyn Bridge Park in New York, and algae and fish have found refuge in the Port De Fontvieille, Monaco, and in the Port of Rotterdam, the Netherlands, according to ECOncrete.

Moreover, the growth of algae, mollusks, tubeworms and similar se organisms form active carbon sinks which absorb CO2 during the 50 to 100 years of the infrastructure's life, which makes it an essential tool in the fight against climate change. Its formula has even won the title of one of the best inventions of 2019 by TIMES magazine, among other awards.

Wind turbines are not the only marine infrastructure where ECOncrete can be applied. "In Fuerteventura, it is being used to protect underwater electricity cables, a project that is due to be completed this year," adds Gutiérrez. This material could also be used, in the future, "in floating wind platforms to achieve even more environmentally friendly energy". For its part, "ecological concrete will also soon be a reality in the port of Malaga, with the construction of a large vertical breakwater to protect vessels".

Another application of this technology can be found in Cala Rajada (Mallorca), with the reinforcement of the breakwater of its marina. Finally, the Port of Vigo, as part of the Living Ports project, will build a dock of more than 300 m2. Also, 100 ecologically designed pieces of coastal protection will be installed. This innovative project was recognised this month as one of the finalists for the 2022 World Sustainability Awards, organized by the International Association of Ports and Harbors (IAPH).

“These ecological construction solutions initiatives are undoubtedly setting a precedent that will be extended to other territories” added Gutiérrez. “Ecological concrete that enhances marine biology and biodiversity is a definite ally for to enable the development of offshore wind energy infrastructures in a manner that is both environmentally responsible and structurally sound and marine-responsible wind energy.”