Monday, 31 January 2011
0
According to figures released today by the European Wind Energy Association (EWEA), 9.3 gigawatts (GW) of new wind power capacity was installed in the EU during 2010, reaching a total of 84 GW by the end of 2010. While impressive, this figure is down 10% on that registered in 2009 and represents "a warning that we cannot take for granted the continued financing of renewable energy". 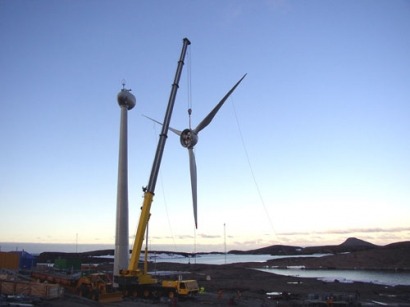 Hoping to swing support towards wind power, EWEA has released its annual round-up of the European wind sector (Wind in power: 2010 European statistics) on the same day the European Commission publishes its findings on progress of renewable energy in the EU and its calls for greater cooperation between Member States and a doubling of capital investments in renewable.

"These figures are a warning that we cannot take for granted the continued financing of renewable energy" said Christian Kjaer, Chief Executive Officer of EWEA. "Better access to financing is urgently needed, and the European Union must act without delay to prevent Europe losing its leadership in wind power and other renewable technologies. Today's communication from the Commission on the financing of renewables is a start, as long as it is followed up quickly by the Commission putting its proposals into action."

Total investments in new wind power plant was unchanged at € 13 billion, compared to 2009, due to the larger share of offshore wind capacity, however Kjaer’s concerns appear to be well founded, with newly installed capacity in 2010 (9.3 GW) down 10% on that registered in 2009 (10.3 GW).

"Remarkable growth in the onshore wind markets of Romania, Poland and Bulgaria could not make up for the decline in new onshore installations in Spain, Germany and the UK. Strong development of the offshore wind market was lead by the UK, Denmark and Belgium," said Kjaer.

The overall market for renewable power capacity, including wind, solar, hydro and biomass, reached record levels in 2010, increasing 31% from 17.5 GW in 2009 to 22.6 GW in 2010. Renewable energy accounted for 41% of all new installations.

Wind power installations accounted for 17% of new electricity generating capacity in 2010, the first year since 2007 that the EU did not install more wind power than any other generating technology. The EU continues to move away from fuel oil and nuclear power for electricity production, decommissioning more old capacity than installing new capacity. However, for only the second time since 1998, the EU installed more coal power capacity than it decommissioned in 2010. 28 GW of new gas capacity was installed last year, compared to 6.6 GW in 2009. Gas represented 51% of all new power capacity in 2010.