Wednesday, 02 October 2013
0
Robin Whitlock
Offshore wind could generate considerable benefits for the Isle with a proportion of generated energy being exported to the UK 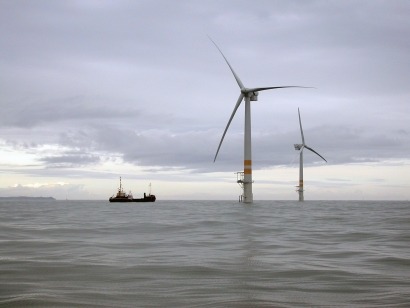 The government of the Isle of Man, the self-governing British Crown Dependency in the Irish Sea, has announced that they are seeking a consultant to assist with forthcoming expressions of interest and tenders for offshore wind development in the Isle of Man’s territorial waters.

Tynwald, the Isle of Man’s parliament, agreed in May that the government would explore opportunities for offshore wind development in territorial waters including for the export of energy to neighbouring jurisdictions. The aim of such development would be to assist with the generation of renewable energy on the island while also providing a substantial income for the government which would help pay for public services.

“My Department is working with the Departments of Infrastructure and Environment, Food and Agriculture and Treasury to seek technical expertise to assist with the process for tendering for future offshore wind farms in our territorial seas” said the Isle of Man Minister for Economic Development, Mr John Shimmin.  “There is a significant opportunity for the Isle of Man to lease parts of its seabed for the generation of renewable energy to assist the United Kingdom to meet its national and European renewable energy targets for 2020. Locating wind turbines in our territorial sea will potentially generate millions of pounds worth of revenue per year for the Isle of Man Government.”

Mr Shimmin added that offshore wind farms offer other economic development benefits for the Isle of Man such as the development of onshore facilities to support operation and maintenance of the turbines. He estimated that just one wind farm in territorial waters could create 60 jobs if progressed. Mr Shimmin also said that previous research has shown a level of 85 percent support among the public on the Isle for offshore wind development.

The Isle of Man’s territorial waters extend to 12 nautical miles from the shore and so it has responsibility for marine spatial planning and zoning over around 4,000 square kilometres of the Irish Sea, more than 87 percent of the Isle’s own onshore territory. The government is currently developing a Marine Plan for the Island’s territorial waters which will take into account current and future uses of the marine environment and other relevant information.

“The British Isles is home to 25 percent of Europe’s wind resource” said Ken Milne, Senior Manager for Energy Policy at the Isle of Man Department of Economic Development (DED). “This resource combined with the shallow depth of water and close proximity to the UK make offshore wind generation cost effective in the Isle of Man. The UK’s indigenous hydrocarbon energy sources are in decline which creates an opportunity for the Isle of Man to export more sustainable and climate-friendly energy to the United Kingdom.”

Mr Milne also pointed out that the UK government’s Energy Bill, currently passing through legislative process, means that joint projects will be eligible for incentives so that renewable energy can be generated in neighbouring countries such as the Isle of Man for export to the UK. The terms would have to be agreed with the UK but it should be possible for the Isle to export a proportion of its renewable energy to the UK mainland.